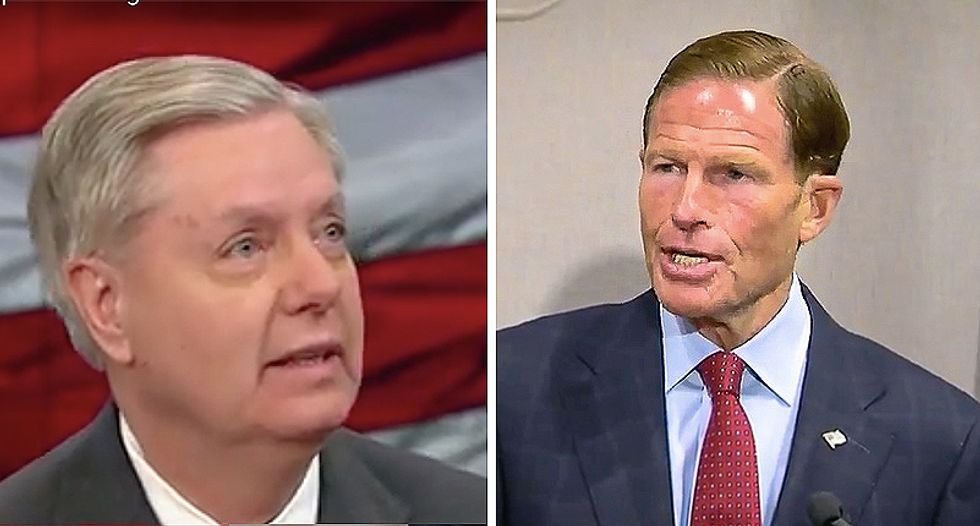 Sen. Richard Blumenthal (D-CT) called out President Donald Trump for being the one behind blocking a true investigation into the accusations against his Supreme Court nominee Brett Kavanaugh.

When it was his turn to question Dr. Christine Blasey Ford, Blumenthal noted definitive answers could be found to many of the questions prosecutor Rachel Mitchell was asking with that investigation.

He noted that she has done a public service by coming forward regardless of what happens to Kavanaugh's nomination.

"Let me tell you why I believe you -- not only because of the prior consistent statements, the polygraph test, and your request for an FBI investigation. You are urging that this committee hears from other witnesses who could corroborate or dispute your story," he continued. "But, also, you have been very honest about what you cannot remember."

He noted that as a prosecutor he understands survivors of violent incidents can't make things come together in a seamless way, but she's obviously being honest by admitting what she doesn't remember and what she does.

That's when Blumenthal turned to read from Sen. Lindsey Graham's (R-SC) own book where he talks about believing survivors of trauma like this.

"Sen Lindsey Graham, in a book that he wrote in 2015 when he was describing his own service. Very distinguished naval service, as a traveler," Blumenthal said before reading a quote from the book.

"I learned how much-unexpected courage from a deep and hidden place it takes for a rape victim or sexually abused child to testify against their assailant", Graham's book reads.

He then turned to attack the nature of the hearing itself.

"This procedure is unprecedented in a confirmation hearing," he continued. "Now, there has been some talk about your requesting an FBI investigation. And you mentioned a point to just a few minutes ago that you could better estimate the time that you ran into Mark Judge if you knew the time that he was working at that supermarket. That's a fact that could be uncovered by an FBI investigation. It would help further elucidate your account. Would you like Mark Judge to be interviewed in connection with the background investigation, and the serious credible allegations that you have made?"

Dr. Ford said that it would be her preference because she could be more helpful that way.

"Well, it's not up to you, it's up to the president of the United States. And his failure to ask for an FBI investigation, in my view, is tantamount to a cover-up. Thank you, Mr. Chairman," Blumenthal closed.