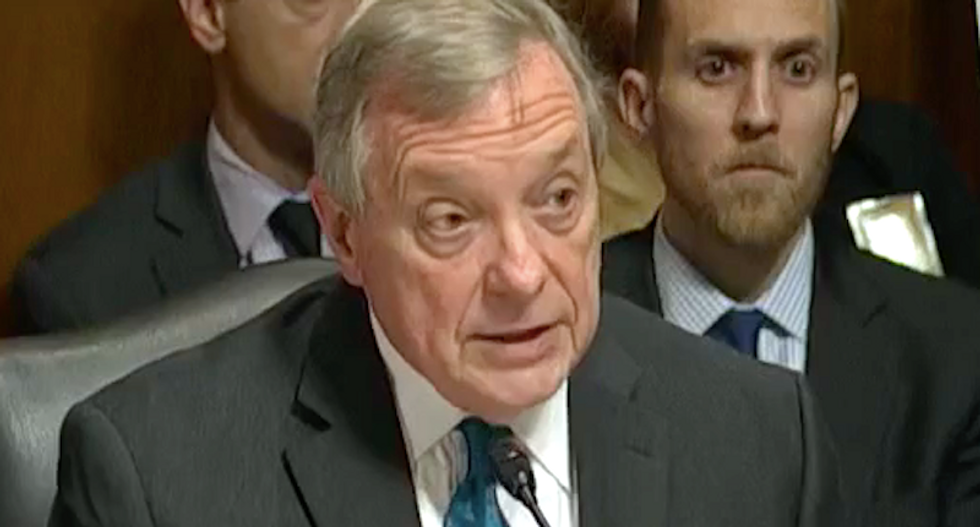 The Illinois Democrat accused GOP senators of blocking a full investigation of sexual assault allegations against Supreme Court nominee Brett Kavanaugh, and he praised Ford for coming forward to testify.

"Dr. Ford, as difficult as this experience must be, I want you to know that your courage in coming forward has given countless Americans the strength to face their own life-shattering past and to begin to heal their wounds," Durbin said. "By example, you have brought many families into an honest and sometimes painful dialogue that should have occurred a long time ago."

He took a shot at Ford's critics -- presumably including President Donald Trump -- who have questioned her motives and credibility.

"I'm sorry for what this has done to you and your family," Durbin said. "No one, no one should face harassment, death threats, and disparaging commenting by cheap shot politicians simply for telling the truth. You and your family should know that for every scurrilous charge and every pathetic tweet there have been thousands of Americans, women and men who believe you, support you, and thank you for your courage."

The Democratic senator asked why the GOP majority refuse to press Trump for an FBI investigation, and he asked why they hadn't subpoenaed Mark Judge -- a Kavanaugh friend Ford had placed in the room as a witness and accomplice to the alleged assault.

"The fact that you are prepared to name both Judge Kavanaugh and eyewitness Mark Judge stands in sharp contrast to the obstruction we've seen on the other side," Durbin said. "The FBI should have investigated your charges as in the Anita Hill hearing, but they did not."

"Mark Judge should be subpoenaed from his Bethany Beach hideaway and required to testify under oath, but he has not," he added. "Judge Kavanaugh, if he truly believes there's no evidence, no witnesses that can prove your case, should be joining us in demanding a thorough FBI investigation, but he has not."