WATCH: Feinstein corners Kavanaugh for flip-flopping on presidential privilege — then mocks him for 'filibustering' 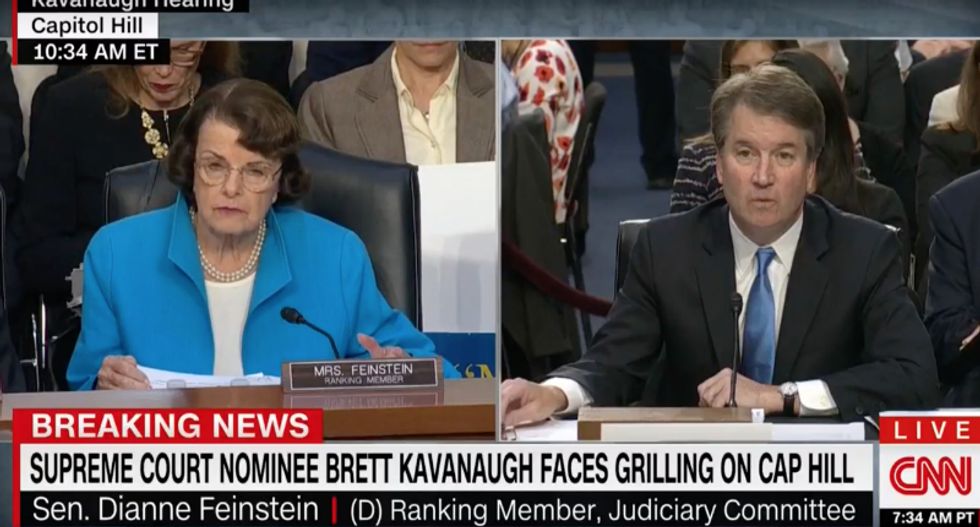 Senator Dianne Feinstein (D-CA) cornered Supreme Court nominee Brett Kavanaugh on the topic of presidential privilege during the second day of hearings, noting his flip flop on the issue -- and then mocked the nominee for filibustering.

Feinstein highlighted Kavanaugh's role in the Starr investigation into President Clinton. "At the time you argued for aggressive questioning of the president," she said. "Since then, you have taken the opposite position." The senator wanted to know what Kavanaugh meant when he said "'I would say no one should be investigating that at all," and asked him what would be "the circumstances where a sitting president could be subject to criminal investigation?"

A clearly flustered Kavanaugh began stammering through a long, rambling response that began with an explanation about punctuation marks and his regret over the whole investigation. It was "a moment for our country that I wish hadn't happened. We all wish it hadn't happened," Kavanaugh began. "And I reflect on that. I wrote a Georgetown University law journal article in '99 reflecting on some of my thoughts about that." Kavanaugh helpfully shared the fact that writing articles is a "tendency" of his, referring many he's written on a variety of topics, all of which seemed to be unrelated to Feinstein's line of questioning.

"What changed was September 11th," Kavanaugh said, launching into what was to be a long soliloquy. "That is what changed."

None of Kavanaugh's response was particularly relevant to Feinstein's question, and she openly laughed in the nominee's face, saying "you're becoming very good, you are learning to filibuster." But she wouldn't let him off the hook, and continued to probe Kavanaugh for his now notorious statement that U.S. v. Nixon may have been wrongly decided.

Again, the nominee refused to respond, leaving Feinstein asking "so you can't give me an answer on whether a president has to respond to a subpoena from a court of law?"