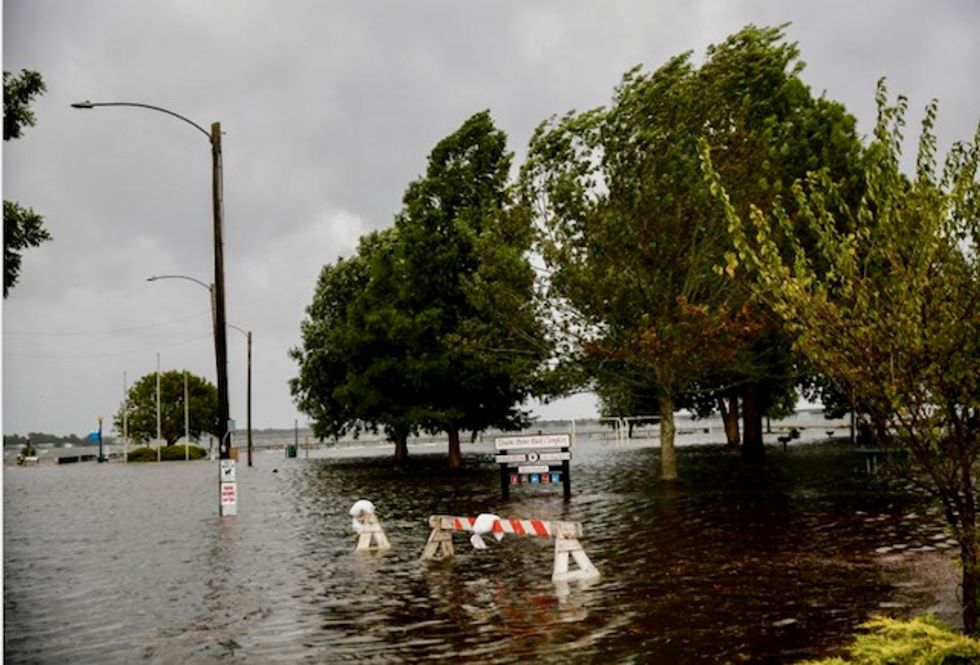 The outer reaches of Hurricane Florence began lashing coastal North Carolina with heavy winds and flooded roads on Thursday ahead of an expected landfall that will bring walls of water and lingering downpours.

The center of Florence is expected to hit North Carolina’s southern coast Friday, then drift southwest before moving inland on Saturday, enough time to drop as much as 40 inches (1 meter) of rain in places, according to the National Hurricane Center.

An estimated 10 million people live in the storm’s path, according to the U.S. Weather Prediction Center, and coastal businesses and homes were boarded up in anticipation. More than 1 million people had been ordered to evacuate the coasts of the Carolinas and Virginia and thousands moved to emergency shelters, officials said.

Florence’s maximum sustained winds were clocked on Thursday at 105 miles per hour (165 kph) after it was downgraded to a Category 2 on the five-step Saffir-Simpson scale, according to the NHC. The winds had been as high as 140 mph earlier in the week.

Some people who had rejected calls to evacuate the targeted area took walks along the water as they tried to enjoy a few final hours of normalcy before Florence’s fury arrived.

In Sea Breeze, Roslyn Fleming, 56, made a video of the inlet where her granddaughter was baptized because “I just don’t think a lot of this is going to be here” after the storm.

Ten miles (16 km) away in Wilmington, wind gusts were stirring up frothy white caps into the Cape Fear River.

“We’re a little worried about the storm surge so we came down to see what the river is doing now,” said Linda Smith, 67, a retired nonprofit director. “I am frightened about what’s coming. We just want prayers from everyone.”

“Hurricane Florence was uninvited but she’s just about here anyway,” he said at a news conference. “Stay on guard. This is a powerful storm that can kill. Today the threat becomes a reality.”

The storm’s center was about 110 miles (180 km) east of Wilmington, North Carolina, at 2 p.m. EDT (1800 GMT) but tropical storm-strength winds and heavy rains already were hitting North Carolina’s Outer Banks barrier islands. The main highway in the Outer Banks was closed in parts as seawater pushed in. Flooding from rain and rising rivers also was reported in New Bern.

Some 11,000 power outages have been reported in North Carolina.

The hurricane center also said the threat of tornadoes was increasing as the storm neared shore.

Florence could bring wind-driven storm surges of seawater as high as 13 feet (4 meters) and NHC Director Ken Graham said on Facebook they could push in as far as 2 miles (3 km). Heavy rains were forecast to extend into the Appalachian mountains, affecting parts of Alabama, Tennessee, Kentucky and West Virginia.

The storm will be a test of President Donald Trump’s administration less than two months before elections to determine control of Congress. After criticism for its response in Puerto Rico to last year’s Hurricane Maria, which officials there said was responsible for 3,000 deaths, Trump has vowed a vigorous response to Florence and defended his handling of Maria.

“3000 people did not die in the two hurricanes that hit Puerto Rico,” Trump said on Twitter. “When I left the Island, AFTER the storm had hit, they had anywhere from 6 to 18 deaths ... Then, a long time later, they started to report really large numbers, like 3000.”

Trump provided no evidence to support his challenge on Maria.

Emergency declarations were in force in Georgia, South and North Carolina, Virginia, Maryland and the District of Columbia. Millions of people are expected to lose power and it could take weeks to resolve the outages.

Near the beach in Wilmington, a Waffle House restaurant, part of a chain with a reputation for staying open during disasters, had no plans to close, even if power is lost. It had long lines on Thursday.