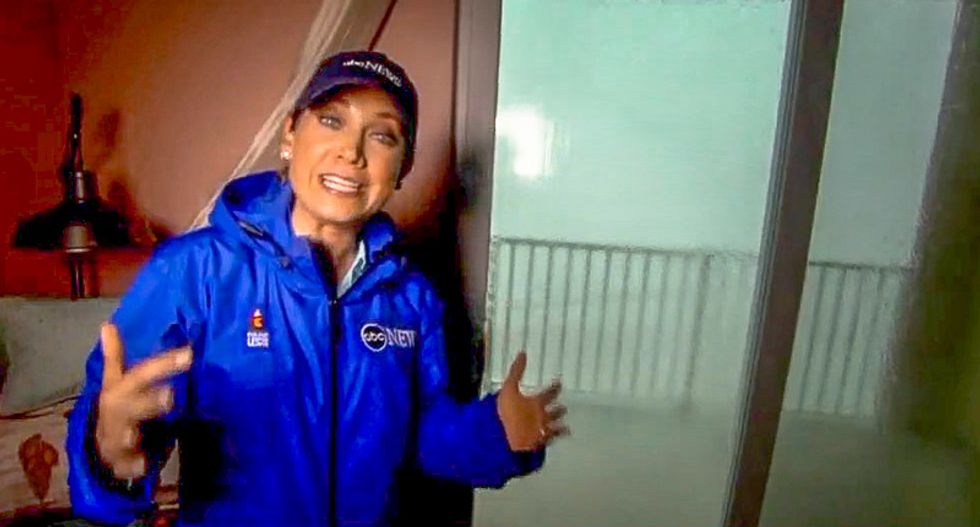 ABC meteorologist Ginger Zee appeared shaken on Wednesday after she witnessed a home being taken off its foundation by Hurricane Michael.

Zee, who was reporting from a "hurricane proof" room in Mexico Beach, Florida, described the scene to ABC News host George Stephanopoulos.

"I just saw something I have never seen in real life," Zee explained. "I have seen it on video and I have seen it in a 3D graphic that we made to describe storm surge."

"I saw an entire home taken off its foundation and roll down the street," the meteorologist explained as her voice crackled with emotion. "That is the type of storm surge we are talking about in Mexico [Beach] at this moment."

Zee noted that the ABC cameras were unable to capture video of the home because of the blinding wind and rain.

"I saw the roof on its side rolling down the street," she said. "And that was one of the structures that I had showed you earlier."

"Anything that was on this coast, within 20 minutes just now, is gone," Zee lamented. "It is going to be washed away. It is going to be one of those concrete slab situations when this all calms down. My heart is racing. I have never seen something like an entire home -- a well-built home -- rolling down the street."

"We just watched that happen in real time," she added. "I'll tell you right now, it makes you shake."

"I can hear it in your voice," Stephanopoulos observed. "It's just staggering."

Watch video below of the aftermath of a home being destroyed in Mexico Beach.