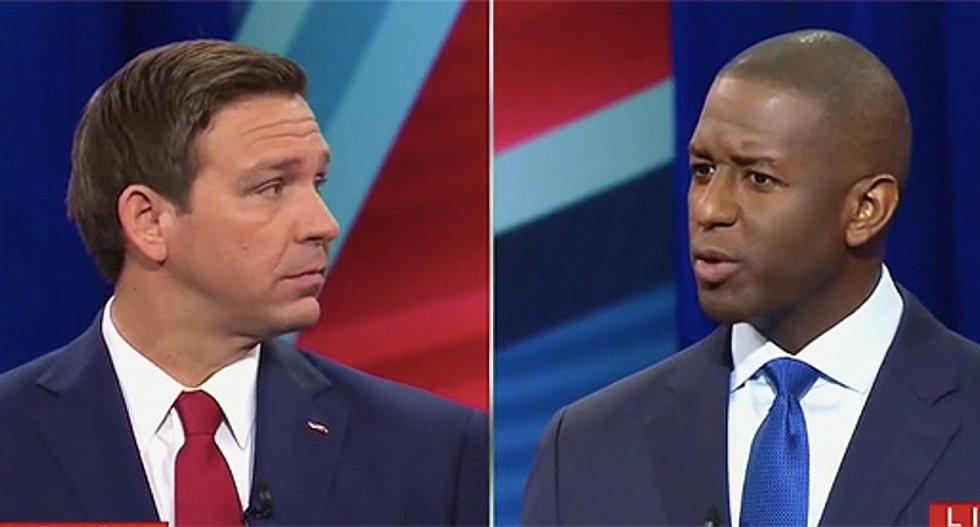 In a strange moment of the Florida Governor's Race on CNN Sunday, Rep. Ron DeSantis pivoted to talk about Israel when he was asked about President Donald Trump. It was enough to confuse his Democratic opponent Andrew Gillum with the bizarre pivot that he confessed he was lost.

"Whoever wins the governorship on November 6 will have to work with the federal government and with President Trump," CNN debate moderator Jake Tapper began. "Congressman DeSantis, you featured your children in a campaign ad in which you were encouraging them to, quote, build a wall out of toy blocks and reading a children’s story about the president saying you’re fired. Do you think President Trump is a good role model for the children of Florida?"

"My wife and I were poking a little fun at ourselves because of the way the campaign was going and I’m proud of my family though," DeSantis began. "I don’t actually read The Art of the Deal to my son Mason. He smiles at anything but that’s not necessarily his cup of tea. Here’s what I know: You know, I was very passionate about moving our American embassy from Tel Aviv to Jerusalem. Andrew opposed that, a couple of months said it was a mistake and said we shouldn’t recognize Jerusalem as Israel’s capital. Every president for 25 years has promised that on the campaign trail. Once in office. They didn’t do it. Donald Trump promised it and followed through with it, so to me when you give your word and you follow through with it as an elected official, that is the model that we’re supposed to do. He was right to move the embassy to Jerusalem. I was there for an historic event. I know Andrew didn’t support that and doesn’t think that’s right but to me that was true leadership."

"The question is whether or not he thinks President Trump is a good role model for the children of Florida," Tapper said.

"That's what I thought. I got confused," Gillum said.

"No, he's not," Gillum said and the audience laughed again. "Donald Trump — Donald Trump is weak. As all weak people do they become bullies and Mr. DeSantis is his acolyte. He's trying out to be the Trump apprentice. He’s tweeting him and talking to him hand complimenting him. My disgust for the president and his behavior actually will have nothing to do with whether or not -— if Trump tries to send us money as President Obama tried to send to the state of Florida to build high-speed rail across I-4 corridor, and our governor said, 'No, we don't want that stimulus.' If Trump tries to send me the 2.6, I’ll take it and bring it to the state of Florida and put the people of the state of Florida to work."

DeSantis refuted the claim by Gillum saying that a governor needs to work with the president to bring money back to the state. As a fact check, DeSantis as a Congressman should have been responsible for that along with the rest of his Senate and Congressional delegation. Congress, not the president, puts together the budget.