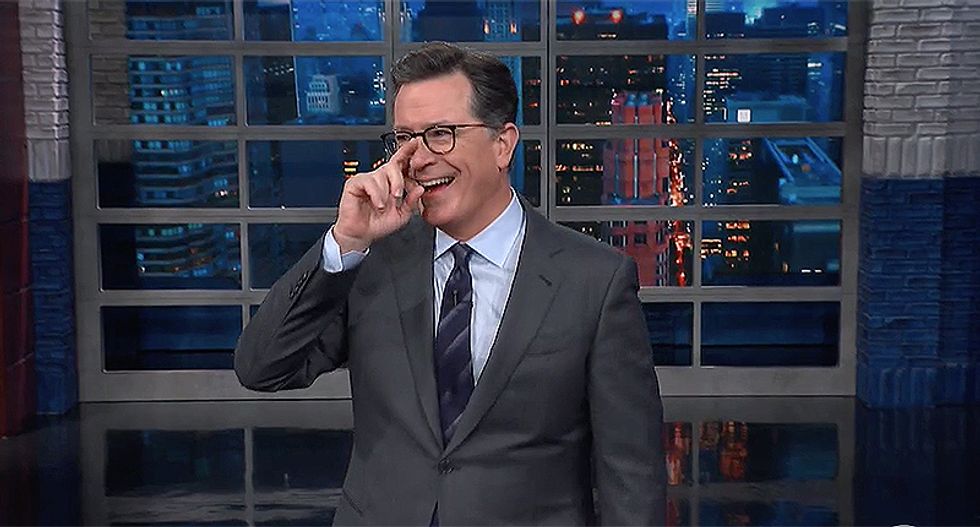 Fox News had a rough day as they struggled to cover a terrorist attack on Democrats. But it was their tweets that prompted CBS host Stephen Colbert to crack up laughing.

"Mistakes can happen, like this tweet from Fox News: 'Suspicious package sent to CNN contained some kind of white power,'" Colbert read. "Just a little bit a little bit. An honest mistake. Fox has since tweeted out another unfortunate error: 'White House committed to finding the perpetrator, vows to do everything they klan.'"

The second tweet was one Colbert just made up.

Colbert's opener also contained a parody on the "Friday the 13th" horror movies, except this horror has to do with the voter suppression of millennials.

"This Halloween, Jason Voorhees works at the Camp Crystal Lake polling place, and he'll stop at nothing to disenfranchize the youth from casting a vote in 'Tuesday VI: Voting Day.' Scream as your I.D. must precisely match the voter roles. Shriek as early voting days and hours are now reduced. Shiver as you are purged from voting rolls. And shudder at the most successful way to suppress voters: judo head chop!"