Colbert: The reason Bush never killed Russia arms treaty was because he never had hookers pee on him 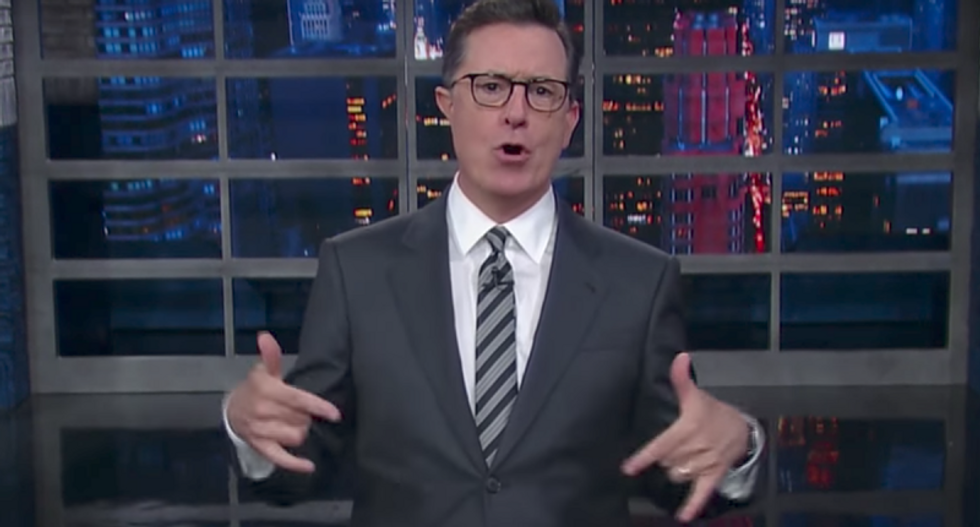 Stephen Colbert ended his Monday monologue with what he called "little stories that slip through the cracks," such as the decision by President Donald Trump to end the nuclear arms treaty with Russia.

"The deal Trump wants to pull out of is the 1987 Intermediate-Range Nuclear Forces Treaty that was signed by Ronald Reagan and Mikhail Gorbachev," Colbert explained. "So, Trump is reopening a 30-year old confrontation. The '80s are back, baby!"

He said that it was probably because he really wants to pound a Mc BLT before his hot date with Ms. Pac-man.

"And Trump picked a strange forum to announce he was pulling out of a major international agreement: a campaign rally in Nevada," Colbert recalled, playing the video of the rally.

"Russia violated the agreement. We're not going to let them violate a nuclear agreement and go out and do weapons, and we're not allowed to," the president said.

"Do weapons?" Colbert asked. "What the hell was that mean? You can't do weapons. It's not lunch or Dallas. Now, you might be saying, 'Stephen, I don't want to get vaporized in a thermonuclear war as much as the next guy, but at least Trump finally did something Putin wouldn't like.' Oh, what simple arguments you have, made up person. Because Putin likes it."

Colbert cited a report saying "Moscow proposed a joint termination of the treaty in 2007 so it could deploy intermediate-range missiles in its south and east to counter Iran, Pakistan, and China."

The proposal was understandably rejected.

"In part, because George W. Bush never paid prostitutes to pee on a bed," Colbert riffed.

Colbert also made fun of Trump's fish story that the weapon sales to the Saudis is the reason he can't sanction the country for the murder of a Washington Post journalist. Trump said that the sale would give tens of thousands of jobs, then hundreds of thousands and ultimately a million jobs.