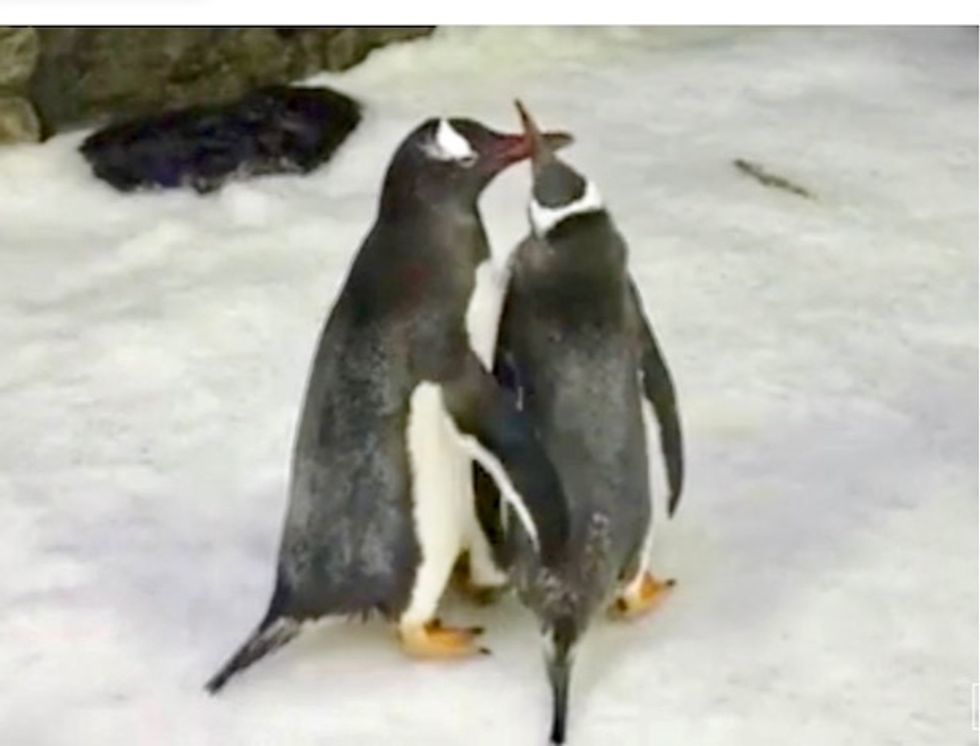 Two male penguins who paired up as a "same-sex couple" have successfully incubated a baby chick and are "doting" on their tiny offspring, an Australian aquarium announced Friday.

Sphen and Magic had caught the attention of aquarium workers when they were constantly seen waddling around and going for swims together.

They then began to build a collective nest of pebbles, prompting the aquarium to provide a dummy egg for them to look after and, when they proved up to the task, a real egg.

"Only bonded penguins will be able to successfully find their partner using their calls when they are separated."

Unlike many mammal species, male and female penguins take on the same parenting roles, and share parental duties 50-50.

"There is no real difference when it comes to breeding behaviours between males and females," Hannan explained.

So it "is common to have male-male or female-female showing courtship and breeding behaviour."

In the wild, however, these courtships are unlikely to result in a chick, so they are normally shortlived, with the penguins becoming unsatisfied and looking for another partner.

"Because we have given Sphen and Magic the opportunity to have a potentially successful breeding season, it is very likely that they will return to each other again next year," said Hannan.

Sea Life Sydney Aquarium/AFP / HandoutIn the wild, the chick would be unlikely to have two fathers

This is not the first time same-sex penguin couples have adopted eggs in captivity, with a handful of zoos worldwide reporting similar cases.

In 2009, two male penguins -- Z and Vielpunkt -- successfully hatched and reared a chick that was rejected by its heterosexual parents at a zoo in Berlin.

Before them came Roy and Silo, two male chinstrap penguins at a zoo in New York who were spotted frequently trying to mate with each other.

After they tried to incubate a rock, zookeepers gave them a foster egg which they successfully hatched. Their foster chick, a female called Tango, eventually paired up with another female.