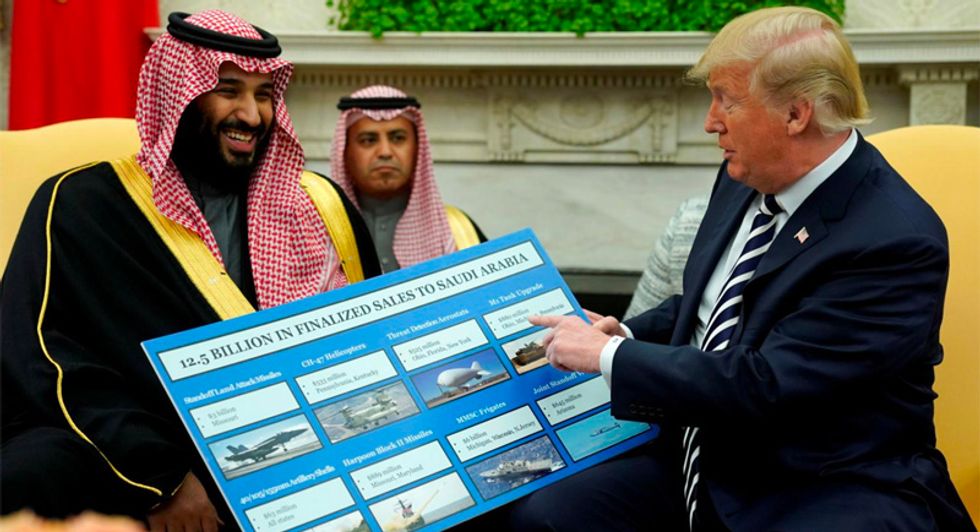 But if he means new U.S. defense jobs, an internal document seen by Reuters from Lockheed Martin forecasts fewer than 1,000 positions would be created by the defense contractor, which could potentially deliver around $28 billion of goods in the deal.

Lockheed instead predicts the deal could create nearly 10,000 new jobs in Saudi Arabia, while keeping up to 18,000 existing U.S. workers busy if the whole package comes together - an outcome experts say is unlikely.

A person familiar with Raytheon’s planning said if the Saudi order were executed it could help to sustain about 10,000 U.S. jobs, but the number of new jobs created would be a small percentage of that figure.

Lockheed Martin Corp declined to comment on the Saudi package. Raytheon Co’s Chief Financial Officer Toby O’Brien said last week that hiring overall is growing, but he did not pin it to any particular program.

Jobs are important to Trump. He campaigned on his ability to create American jobs, especially high-paying manufacturing ones. Meanwhile he has limited his criticism of Saudi leadership over the killing of a prominent critic because he did not want to endanger the massive arms deal.

Trump’s 500,000 figure has been greeted with widespread skepticism given the five biggest U.S. defense contractors, who make nearly every item on the Saudi list, now employ 383,000 people.

Documents seen by Reuters and interviews with defense industry sources familiar with the arms package suggest that between 20,000 and 40,000 current U.S. defense industry workers could be involved in Saudi-bound production if the whole $110 billion package goes through.

Existing workers typically are experienced, skilled, who can be redeployed more easily than new hires who would require significant upfront investment in their training.

One significant caveat to any predictions on job creation is whether all of the missile defenses and radars, ships, tanks, software, bombs and other equipment listed in the full Saudi package get delivered.

Since Trump’s trip to the Kingdom last year, little economic activity has taken place beyond Lockheed’s work on four frigates the Saudis have ordered.

The order will yield nearly 10,000 jobs in the Saudi ports for maintenance workers, but only 500 new U.S. jobs will be created, according to documents seen by Reuters.

Executives at the several of top U.S. defense companies say Riyadh had wanted much of the military equipment as a way to both develop new domestic industry and to create new jobs and local expertise as a part of Crown Prince Mohammed bin Salman’s Vision 2030 initiative to wean the country off oil dependency.

The arms package Trump announced in May 2017 came under renewed scrutiny after the Oct. 2 killing of Washington Post columnist Jamal Khashoggi in the Saudi consulate in Istanbul. The killing provoked international outrage and both the administration and defense contractors have been working to prevent a backlash that could imperil what Trump has called a “tremendous order” and 500,000 jobs.

Industry executives have argued that without the Saudi package coming through they would have fewer orders to fill, but robust U.S. defense budgets, which account for the majority of their sales, coupled with a record backlog of orders suggest little risk that workers would face layoffs if the Saudi sales package failed to materialize.

Certainly for each defense manufacturing job, other adjacent jobs are supported indirectly by higher demand for defense products.

But Heidi Garrett-Peltier, a research fellow at the Political Economy Research Institute, estimated that for this type of industry the highest multiplier would be just below 3.2. Given that, 20,000 to 40,000 sustained or new jobs could generate between about 64,000 to 128,000 jobs in related industries, Reuters calculations show, bringing the total of sustained and new jobs to between 84,000 and 168,000.

In short, 500,000 jobs Trump keeps bringing up is at least three to five times higher than what one could expect from the Saudi deal, given the estimates from the companies themselves, plus the most generous use of the indirect multiplier.

By its own math, the U.S. State Department said in May 2017 that the Saudi deal could support “tens of thousands of new jobs in the United States.”