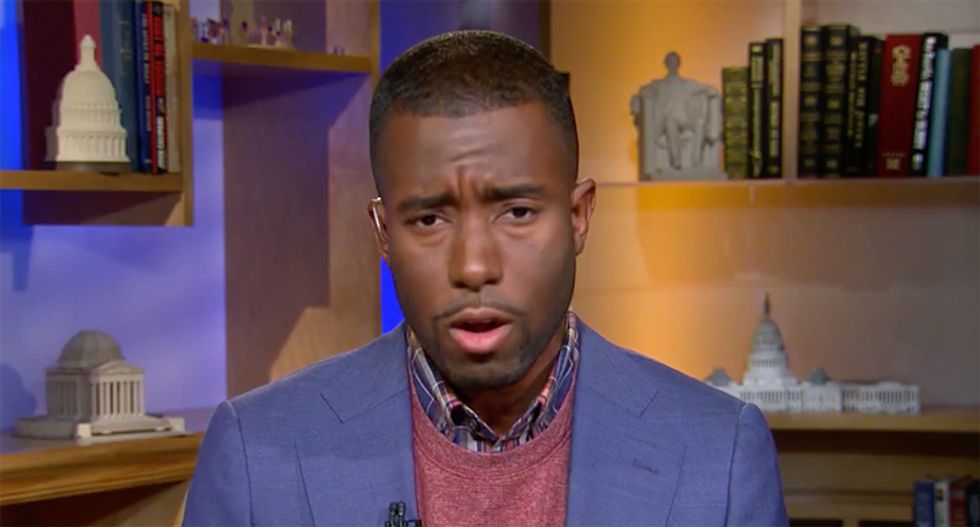 Black Republican political consultant Shermichael Singleton admitted his increasing frustration with GOP efforts to deny African-Americans their right to vote during a Saturday appearance on MSNBC.

"Now to a growing firestorm in Georgia over accusations of voter suppression," host Alex Witt noted. "Civil rights group are suing Georgia Secretary of State and GOP candidate for Governor Brian Kemp over a 2017 voter registration law that has more than 50,000 registrations currently on hold."

"If you look at this, can you apply the world 'discriminatory' to these cancellations? Witt asked Singleton.

"Time and time again, I think we are seeing -- unfortunately -- with my party is that because they cannot compete with people of color, they're finding other areas, to essential displace those individuals from being able to participate in our -- honestly our biggest part of being an American, the ability to vote," Singleton admitted. "And I think that is extremely unfortunate."

"Shermichael you're a Republican here -- you just said that it's 'your party,'" Witt noted. "Are you raising your hand and screaming loud and clear, trying to say 'stop this'?"

"There are a lot of African-Americans who will say 'yes, I am conservative on a lot of things,'" he said. "But with the current Republican Party, they will never vote Republican."

"And Alex, I got to tell you, I don't blame them -- and many times I am beginning to ask myself," he added.

The GOP political consultant acknowledged he had even been questioning whether he can make in difference in decreasing the GOP's racism.

"Am I even making any type of an impact on this party and I'm not even sure at this point I really am?" he wondered.

"That's got to be frustrating, to say the least," Witt noted.

A former Democratic Party legislator from Missouri, Don Calloway, sensed the host would turn to him next.