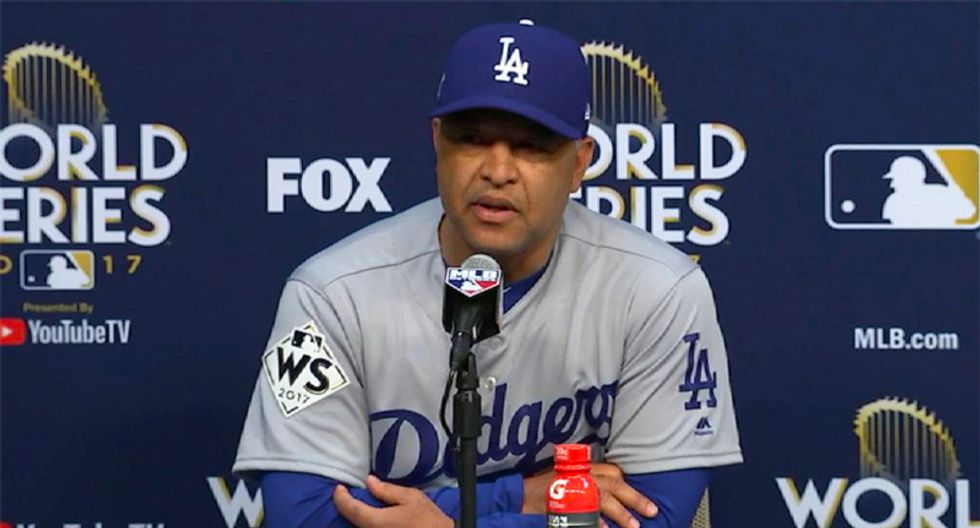 Roberts elected to take Hill out of the game with one out and one runner on base despite Hill having only given up one hit, a move that backfired as the Dodgers bullpen was battered in a 9-6 loss to the Boston Red Sox.

“Watching the Dodgers/Red Sox final innings,” Trump wrote in his tweet. “It is amazing how a manager takes out a pitcher who is loose & dominating through almost 7 innings, Rich Hill of Dodgers, and brings in nervous reliever(s) who get shellacked.

“4 run lead gone. Managers do it all the time, big mistake!”

Roberts looked surprised to hear the president had weighed in when asked by a reporter about the tweet in a post-game press conference.

“The president said that?” he said.

“I’m happy he was tuning in and watching the game. I don’t know how many Dodgers games he’s watched. I don’t think he was privy to the conversation.

Roberts said his decision to pull Hill came after the left hander suggested he was beginning to tire after 91 pitches.

“I had a conversation with Rich, and we talked about it,” Roberts said.

“So right there, I know Rich did everything he could, competed, left everything out there.”

Roberts’ decision comes the day after he was also criticized for replacing starter Walker Buehler after he threw seven scoreless innings in Game Three of the series.

The Dodgers bullpen could not keep the lead, with Boston levelling it at 1-1 in the eighth, which eventually led to a marathon 18-inning affair that the Dodgers won 3-2 with a walkoff home run by Max Muncy.

The Dodgers now trail the Red Sox 3-1 in the best of seven series heading into Game Five on Sunday in Los Angeles.