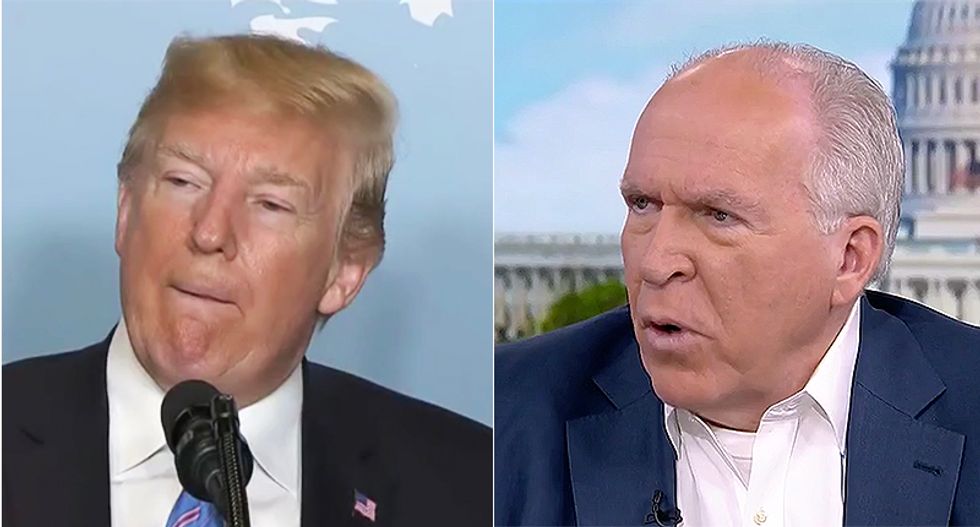 In response to bomb threat sent to him, former CIA director John Brennan said that President Donald Trump's rhetoric leads to acts of violence and is "unproductive" and "Un-American."

Brennan was interviewed by Mark Updegrove of the LBJ Foundation on Wednesday.

"I think we're at a very unfortunate stage of our national history when we cannot have the civil discourse that we need about the future direction of our country and policies without having very disturbed individuals, resorting to attempted acts of violence," he said.

He added, "This country was founded upon the foundation of freedom and liberty and freedom of speech, and if I and others are being targeted because we're speaking out and we're living up to our responsibilities as citizens, I think that's, again, is a very unfortunate turn of events."

Updegrove then read Trump's statement about the bomb threats. "Donald Trump made a statement earlier today in which he said, 'I just want to tell you that in these times, we have to unify. We have to come together. And send one very clear, strong, unmistakable message that acts of threats or political violence of any kind have no place in the United States.'"

Brennan responded back by saying those words are not in alignment with Trump's divisive leadership style.

"Donald who?" Brennan joked. "I think it's very important for an individual who is in the Oval Office today to say exactly that. That we need to come together as a country. We need to unite. We may have differences, but these should be no reason whatsoever to resort to these types of acts of intimidation and potentially violence. I sincerely wish that Donald Trump though would have said these things previously and regularly."