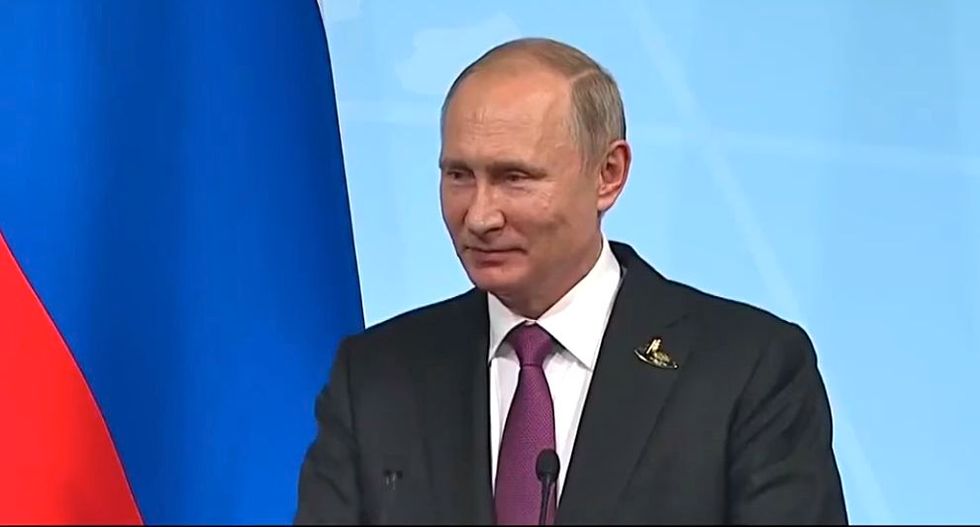 Russian President Vladimir Putin isn't going anywhere any time soon. Chances are, President Donald Trump will be long gone by the time his mentor takes a back-seat to the Russian government, according to former Russian propagandist who spoke to the Daily Beast.

In an interview, Vitaly Mansky walked through the fascinating videos used for Putin's original presidential campaign. Mansky turned against Putin and crafted a documentary using that insider footage that shows the Russian president's longing to restore the Soviet-era glory to Russia.

Those first few years of Putin's rule afforded Mansky the ability to create propaganda with whatever questions he wished. Until now, all of that footage has been locked away, but the release of the documentary "Putin’s Witnesses" just showed the world a different side to the Russian leader.

There is a scene where Boris Yeltsin explains he picked Putin from 20 other candidates to take over the country. When Putin "won" his election in 2000, Yeltsin went to call Putin to congratulate him. Putin never answered.

“The day before, Putin would have known that Yeltsin had the power to change the whole situation. After he was elected, he knew he was safe. He didn’t feel the need to return the call,” Mansky explained to the Daily Beast.

Putin didn't share previous leaders' desires to nix the old aspects of the Soviet era. Instead, He started by bringing back the Soviet national anthem, which was changed in 1990.

When Mansky asked Putin about it, the president said it was "necessary to restore the citizen’s faith” in the establishment. He told a story of a woman he met on his campaign tour who begged for their old life back. "The way it was 20 years ago," she said.

“We cannot take everything from the people… why consign that to the dustbin of history?” Putin asked.

Not long after the discussion, Putin told Mansky he didn't want that information in the film because people might not understand the move and associate it with communist rule.

The two embarked on a conversation about the issue where Putin tried to convince Mansky of his side. All of Putin's advisors were firmly on his side with all policies, and Mansky was the only one left to persuade. When Mansky asked Yeltsin about it after Putin's first year, the former leader called it "reddish," meaning he found it to still have a "hint" of communism still in it.

"Our strength is given to us by faith in our Homeland," an English translation of the chorus goes. "Thus it was, so it is and always will be!"

“No offense, but I’m not going to share your opinion on the anthem,” Mansky told Putin. The Daily Beast called it a "rare moment of insubordination" that sparked a half-smile from the leader.

The Best asked how Putin allowed Mansky to talk to him in this way.

“That’s difficult to answer,” he replied. “I must admit I haven’t seen any footage of Putin over the last 18 years in which he would allow this style of communication with him. There’s this recent Oliver Stone film, and it was very strange to watch it because Oliver Stone has Oscars and he’s got an American passport. It’s not clear what he could be really afraid of, but he agreed with absolutely everything Putin said.”

“When it comes, I just try to tell it to go, because I want to feel and be free, and I don’t want to think twice before touching some door handle and worrying about what might happen,” Mansky also said.

The touch of a door handle could prove to be deadly as former Russians have already learned after they escaped the Kremlin's rule.

“I try to expel or get rid of this question completely—not to think about it,” said Mansky. “When it comes, I just try to tell it to go, because I want to feel and be free, and I don’t want to think twice before touching some door handle and worrying about what might happen.”

He explained that he knew the part he played in the machine that promoted Putin. Working for state TV meant there was no way of being an impartial journalist.

“I would not call it an apology exactly, but the realization of your own guilt,” he said of his documentary. “This realization is not enough. I would like the audience of the film, especially people in Russia, to contemplate—to think about all the mistakes that have been made in the past so that in future we won’t make so many of them.”

Read the full interview with the Daily Beast and watch the trailer of the documentary below: