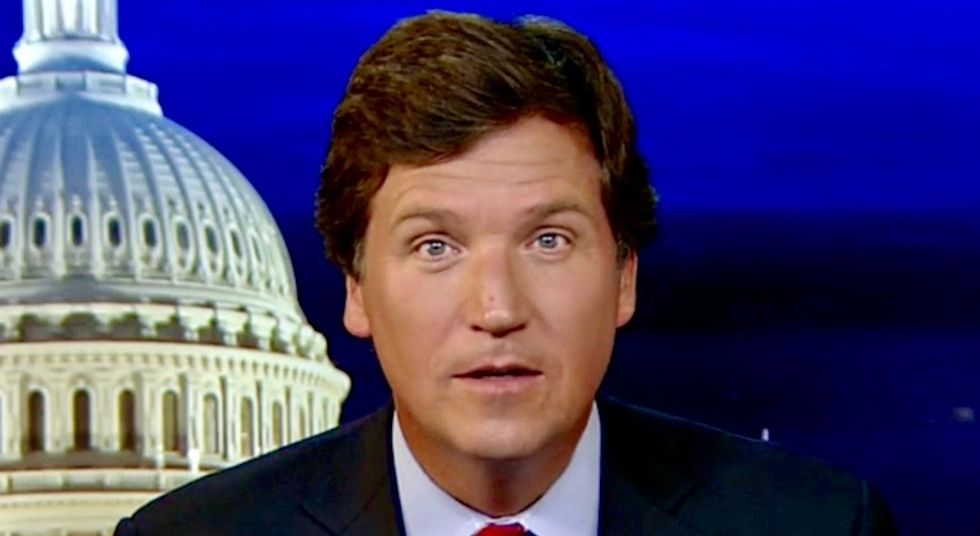 During his Monday evening show, Fox News' Tucker Carlson derided pundits for encouraging what he considered the "genocide" of "white male Christians" — the host's most overt white nationalist dog whistle yet.

Carlson cited a column by former Bush campaign strategist Matthew Dowd that encouraged "white male Christians" to give up their "positions of power" to those less privileged.

The host then claimed that while Dowd himself did not "advocate for genocide," Georgetown professor Christine Fair did.

Carlson read a tweet Fair posted on September 29 in which she used graphic language to describe fantasy punishments for men who enable rapists.

"All of them deserve miserable deaths while feminists laugh as they take their last gasps," Fair wrote. "Bonus: we castrate their corpses and feed them to respond? Yes."

The tweet notably made the rounds on right-wing blogs and FoxNews.com before the host read it on-air as an example of "genocide."

The phrase "white genocide" is one uttered by a number of white nationalist and "identitarians" intent on preserving the white race.

Though Carlson has over the past year inched (and at times sprinted) closer to white nationalist rhetoric by deriding the "genocide" of white South African farmers and allowing a guest who opined about Arizona's future "as a Hispanic society."

The South Africa segment specifically made waves with President Donald Trump in late August — days after it aired on Fox News, the president tweeted about the evidence-free "large-scale killings of farmers."