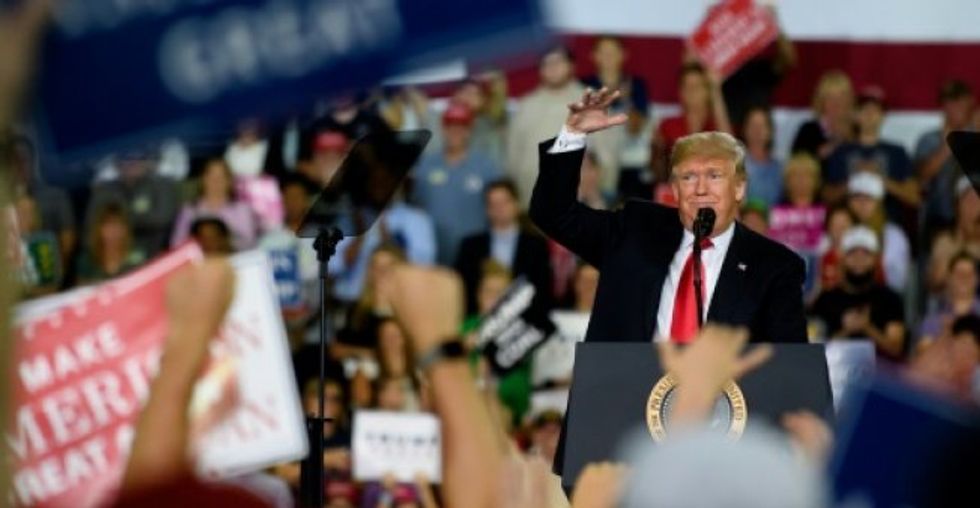 The benchmark Nikkei 225, the Hang Seng in Hong Kong and the Shanghai Composite all plummeted more than three percent in early morning trade, as investors fretted about surging interest rates and an ongoing trade war.

"All bets are off," warned Stephen Innes, head of trading at OANDA, adding that the markets "are fraught with peril."

"The US equity bloodbath is taking no prisoners in Asia as a sea of red greets investors at the open, as equity deleveraging and liquidation intensifies," he said.

The steep drop in Asia followed a decline on Wall Street of nearly 830 points, the biggest fall since February, amid Trump's latest criticism of the Federal Reserve, the US central bank.

"I think the Fed is making a mistake. It's so tight. I think the Fed has gone crazy," Trump told reporters as he arrived for a campaign rally ahead of the US mid-term elections.

He has frequently criticised the US central bank for gradually raising interest rates.

Trump has repeatedly touted Wall Street records as proof of the success of his economic programme, including his confrontational trade strategy.

But he downplayed the first major drop in months, saying, "it's a correction that we've been waiting for a long time."

The rout in US shares followed substantial losses on European bourses, due in part to tensions between Brussels and Rome over Italian budget plans that have revived fears about the eurozone.

Bourses in Paris and Frankfurt both lost more than two percent, while London fell 1.3 percent.

"The selling is not panicking but it's persistent," Briefing.com analyst Patrick O'Hare said of the proceedings. "It's all about investors rethinking their exposure to stocks."

Many of the biggest US names fell hard in Wednesday's session, with Apple, Boeing and Facebook all slumping more than four percent and Amazon, Nike and Microsoft shedding more than five percent.

Stocks have been under pressure since the yield on 10-year US Treasury bonds jumped above three percent last week, a sudden move that raised fears of an overheating economy, speeding inflation and more aggressive Federal Reserve interest rate increases.

Last week's jump in yields followed strong US data but many analysts have been anticipating a change in the dynamics in the bond market due to expectations that central banks in Europe and Japan will soon phase out bond-buying programmes.

The turmoil on stock markets came a day after the International Monetary Fund slashed its global growth forecast on worries about trade wars and weakness in emerging markets.

In other markets, oil prices fell sharply on worries that Hurricane Michael, which is battering the US state of Florida, will dent demand for gasoline and other petroleum products.