Harvard law professor: Democrats are committing 'political suicide' if they do not pack the Supreme Court 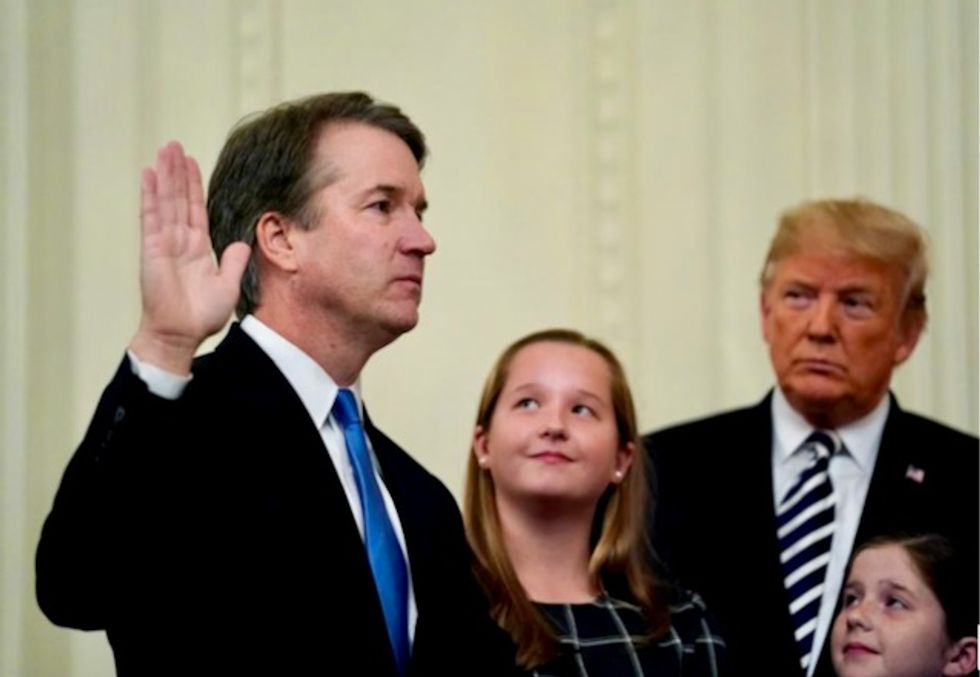 U.S. Supreme Court Associate Justice Brett Kavanaugh takes his oath during his ceremonial public swearing-in as U.S. President Donald Trump and Kavanaugh's daughters Liza and Margaret look on in the East Room of the White House in Washington. REUTERS/Jonathan Ernst

A respected Harvard Law School professor argued this week that Democrats must fight back against Republicans and pack the Supreme Court or they are committing "political suicide."

In a column for Take Care, Professor Michael Klarman asserts that adding a new liberal justice to the nine existing members is the only realistic way to balance the high court after Senate Majority Leader Mitch McConnell "stole" a court appointment from President Barack Obama.

"Because Senate Majority Leader Mitch McConnell straight-out stole the seat vacated by the death of Justice Antonin Scalia early in 2016, a seat that should have been filled by President Barack Obama’s nominee (Merrick Garland), liberals are unlikely to control the Court for at least another couple of decades," Klarman writes. "As has been frequently noted, recently appointed Justices Neil Gorsuch and Brett Kavanaugh were nominated to the Court by a president who lost the popular vote by nearly three million votes, and were then confirmed by a majority of senators who represented minorities of the American population."

Klarman endorses an effort to restrict justices to 18 year terms by amending the Constitution. But he observes that passing a constitutional amendment has a high bar and would not happen quickly.

"The other solution—expanding the size of the Court once Democrats regain control of Congress and the presidency—will inevitably appear partisan (though, rightly understood, it is not)," the professor advises. "Adding one justice would be an obvious and eminently equitable solution to Mitch McConnell’s theft of the seat President Obama nominated Merrick Garland to fill."

According to Klarman, Republicans have spent years violating the norms of Democracy in order to shift the balance of the courts.

"The developments just described illustrate a sort of sickness that now pervades the Republican Party: Democracy doesn’t matter; the rules of the game don’t matter; only holding and accumulating power matters," he says. "Democrats have not behaved that way, and, in general, they shouldn’t."

But Democrats cannot undo Trump’s illegitimate appointments to the Supreme Court in the same way that they can repeal voter ID laws or undo Republican political gerrymandering. Supreme Court appointments carry lifetime tenure, and the only constitutional way to offset them is by creating new Court vacancies to be filled by Democrats. Moreover, just about every democracy-entrenching device that Democrats might enact—new voting rights legislation at the federal level, campaign finance laws, state independent districting commissions—is a plausible candidate for invalidation by a Republican majority on the Supreme Court.

Klarman insists that if Democrats fail to take action it would be "a sort of unilateral disarmament that rarely works out well for the disarming party."

"However, on this occasion, there is an obvious response to the concern that if Democrats pack the Court, Republicans will just pack in further in their favor at the next opportunity: Republicans are already packing the courts," he concludes. "[F]or Democrats not to respond in kind is to commit political suicide."

According to CNN's chief medical correspondent Dr. Sanjay Gupta, comments made by Gov. Kristi Noem (R-SD) over the weekend about pills used to induce an abortion should be taken with a grain of salt, adding that the GOP governor was overstating the dangers of using them.

On Sunday's "Face the Nation" Noem said she would like to block online appointments and stop women from buying prescription abortion pills online and receiving them through the mail, telling host Margaret Brennan, "These are very dangerous medical procedures. We don’t believe it should be available because it is a dangerous situation for an individual without being medically supervised by a physician.”