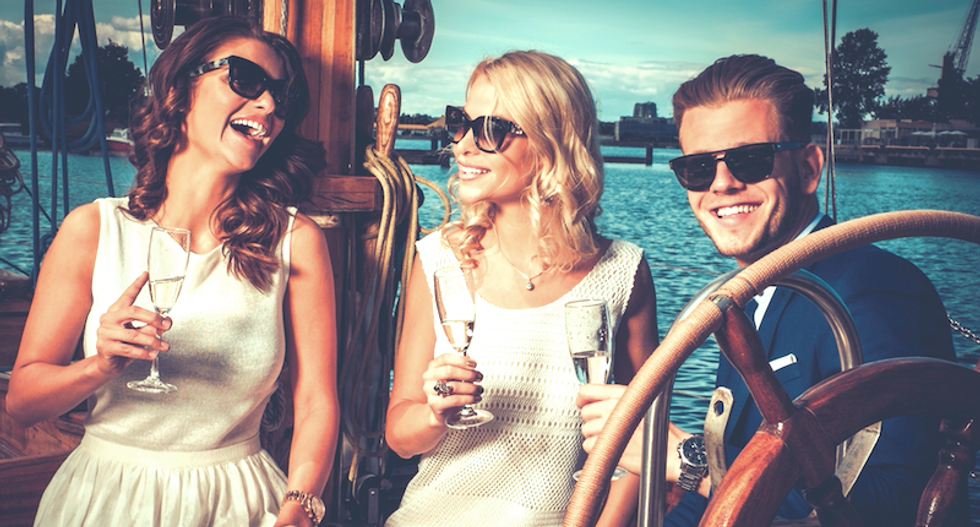 Executives say the combination will make their companies more efficient, allowing them to gain economies of scale and squeeze waste out of the system.

Rubbish. This is what big companies always say when they merge.

The real purpose is to give Aetna and CVS more bargaining power over their consumers and employees, as well as pharmaceutical companies and healthcare providers (which have also been consolidating).

The result: Higher prices. Americans already spend far more on healthcare and medications per person than do citizens in any other developed country – and our health is among the worst.

America used to have antitrust laws that permanently stopped corporations from monopolizing markets, and often broke up the biggest culprits.

But now, especially with Trump as president and lobbyists and CEOs running much of the government, giant corporations like Aetna and CVS are busily weakening antitrust enforcement and taking over the economy.

They’re also keeping down wages. Workers with less choice of whom to work for have a harder time getting a raise. So when local labor markets are dominated by a major drug chain like CVS or a big box retailer like Walmart, these firms essentially set wage rates for the area.

These massive corporations also have a lot of political clout – another reason they’re consolidating.

We see the same pattern across the economy. Wall Street’s five largest banks now account for 44 percent of America’s banking assets – up from about 10 percent thirty years ago. That means higher interest rates on loans, higher late fees, and a greater risk of another “too-big-to-fail” bailout.

But politicians don’t dare bust them up because Wall Street pays part of their campaign expenses.

Oh, and why does the United States have the highest broadband prices among advanced nations and the slowest speeds?

Because more than 80 percent of Americans have no choice but to rely on their local cable company for high capacity wired data connections to the Internet – usually Comcast, AT&T, or Verizon. And these corporations are among the most politically powerful in America. (In a rare exception to Trump’s corporate sycophancy, the Justice Department is appealing a district court’s approval of AT&T’s merger with Time Warner.)

Have you wondered why your airline ticket prices have remained so high even though the cost of jet fuel has plummeted?

Because U.S. airlines have consolidated into a handful of giant carriers that divide up routes and collude on fares. As recently as 2005 the U.S. had nine major airlines. Now we have just four. And all are politically well-connected.

Why does food cost so much? Because the four largest food companies control 82 percent of beef packing, 85 percent of soybean processing, 63 percent of pork packing, and 53 percentof chicken processing.

Monsanto alone owns the key genetic traits to more than 90 percent of the soybeans planted by farmers in the United States, and 80 percent of the corn. Big Agribusiness wants to keep it this way.

Google’s search engine is so dominant “google” has become a verb. A few years ago the staff of the Federal Trade Commission recommended suing Google for “conduct [that] has resulted – and will result – in real harm to consumers and to innovation.” But the commissioners decided against the lawsuit, perhaps because Google is also the biggest lobbyist in Washington.

The list goes on, industry after industry, across the economy. Antitrust has been ambushed by the giant companies it was designed to contain.

Under Trump and the Republicans, Congress has further squeezed the budgets of the antitrust division of the Justice Department and the Bureau of Competition of the Federal Trade Commission. Politically-powerful interests have squelched major investigations and lawsuits. Right-wing judges have stopped or shrunk the few cases that get through.

Trump and his Republican enablers rhapsodize about the “free market,” yet have no qualms about allowing big corporations to rig it to boost profits at the expense of average people. As the late Robert Pitofsky, former chairman of the Federal Trade Commission, once noted, “antitrust is a deregulatory philosophy. If you’re going to let the free market work, you’d better protect the free market.”

We’re now in a new Gilded Age of wealth and power similar to the first Gilded Age of the late nineteenth century when the nation’s antitrust laws were enacted. But unlike then, today’s biggest corporations have enough political clout to neuter antitrust.

Unless government un-rigs the market through bold antitrust action to restore competition, the hidden upward distributions from consumers and workers to corporate chieftains and major investors will grow even larger.

If Democrats ever get back in power, one of the first things they need to do is revive antitrust.