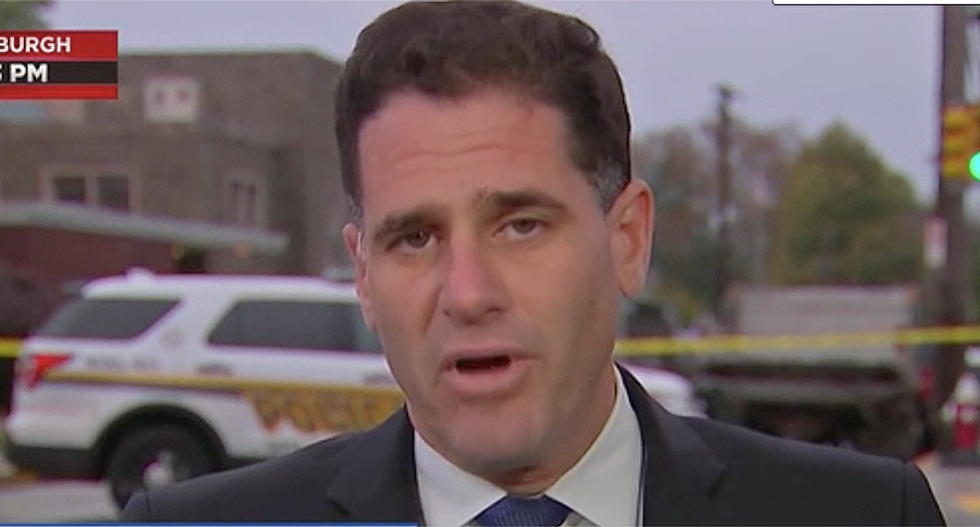 In an MSNBC interview, Ron Dermer, Israel's Ambassador to the U.S., blamed "both sides" for what has become the largest attack on Jews on American soil in history. While it makes sense that anti-Semitism would become more prevalent among racist white supremacists and the next generation of Nazis, it's unclear who on the left he is attempting to blame for the 11 Jewish members of the Tree of Life synagogue in Pittsburgh Saturday.

Greetings of Shabbat shalom were pierced with bullets during the morning Sabbath. It is just a little over the first year since the Charlottesville, Virginia riots where men carried torches chanting "Jews will not replace us." In wake of that incident, President Donald Trump proclaimed there were bad people "on both sides.

Israel has sent Rabbis and leaders to Pittsburgh to help those suffering following the tragedy. Ambassador Dermer echoed the same Trumpian language when speaking to MSNBC host Ayman Mohyeldin Sunday. After a sensible explanation that anti-Semitism has been continuing for centuries, Dermer claimed it had nothing to do with Trump because it's happening everywhere.

He explained that the advent of social media has allowed Nazis to connect and spread their hate globally.

"I know that one of the things that Isreal always does is it combats or spearheads the effort to combat anti-Semitism around the world," the host explained. "Obviously, the first question that comes to mind is a statistic that has come out from the Anti-Defamation League which reports a 57 percent increase in anti-Semitic attacks. Do you attribute that to the heated rhetoric since president Trump took office? Or how do you explain this explosion of anti-semitism in the U.S.?"

"I saw what President Trump said yesterday at a rally in Illinois," Dermer continued. "I'm not aware of a single non-Israeli leader that has made such a strong statement in condemning anti-Semitism meaning he said to those who seek to destroy the Jewish people, we will destroy them. I have never heard a non-Israeli leader say that and we appreciated that. We know it wasn't just on one side of the partisan divide in America. I just had a meeting with Sen. [Bob] Casey (D-PA), with Congressmen, both Democrats, and Republicans who have come together to condemn this heinous attack against the Jewish community in Pittsburgh and I think it sends a very strong message."

Mohyeldin played the clip of Trump making the admission that he's a "nationalist," as well as his "both sides" moment after Charlottesville.

The host interjected to say he's aware of the attacks on Jewish people in America; he's was asking about the rhetoric.

Dermer repeated Trump's words were the strongest that he heard from any leader.

"I think the problem is that when people attribute anti-Semitism to one side of the political debate, they make a very big mistake," Dermer said. "The person we should blame is the anti-Semite... The difference in this president is that he has Jews in his family. So, I think there's no question in my mind that he wants to confront the anti-Semites. I hope that people on both sides of the political aisle will put politics aside and will work together to confront anti-Semitism."

The so-called "radical left" on college campuses is generally blamed on Antifa, a group that stands for anti-fascism. Such anti-fascists were arrested en masse during the Holocaust when trying to fight back against Nazis. Similarly, when college students tried to ban Nazis and white supremacists from being allowed on college campuses, the right called them "snowflakes" and anti-patriotic for denying First Amendment rights to all groups. So, it's unclear what the "radical left" is that Dermer is referring to and it wasn't explained.