Jim Acosta rattles Sarah Sanders: 'Shouldn't you have the guts to state which outlets are the enemy of the people?' 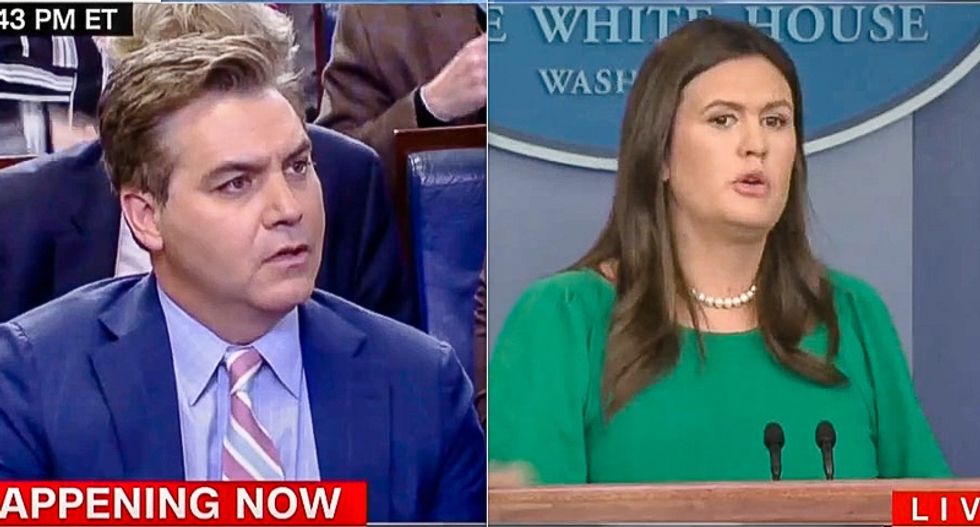 White House Press Secretary Sarah Sanders on Monday doubled down on President Donald Trump's assertion that the press is "the enemy of the people," but she refused to identify specific outlets.

At the first White House press briefing in nearly a month, Sanders was peppered with questions about Trump's rhetoric in the wake of the mass shooting at a Synagogue in Pittsburgh and multiple pipes bombs which were sent to liberal public figures.

CNN correspondent Jim Acosta noted that Trump had called the media "the enemy of the people" after CNN was allegedly sent as many as three pipe bombs from a Florida Trump supporter.

"Shouldn't you reserve the term enemy for people who are actually the enemy of the United States rather than journalists?" Acosta asked.

"The president is not referencing all media," Sanders replied. "He's talking about the growing amount of fake news that exists in the country. The president is calling that out."

But when Acosta pressed Sanders for a list of media outlets that were considered to be "the enemy," Sanders refused.

"Those individuals probably know who they are," Sanders quipped.

"I think it's irresponsible of a news organization like yours to blame responsibility of a pipe bomb that was not sent by the president," Sanders said, referring to CNN. "Not just blame the president, but blame members of his administration for those heinous acts. I think that it outrageous."