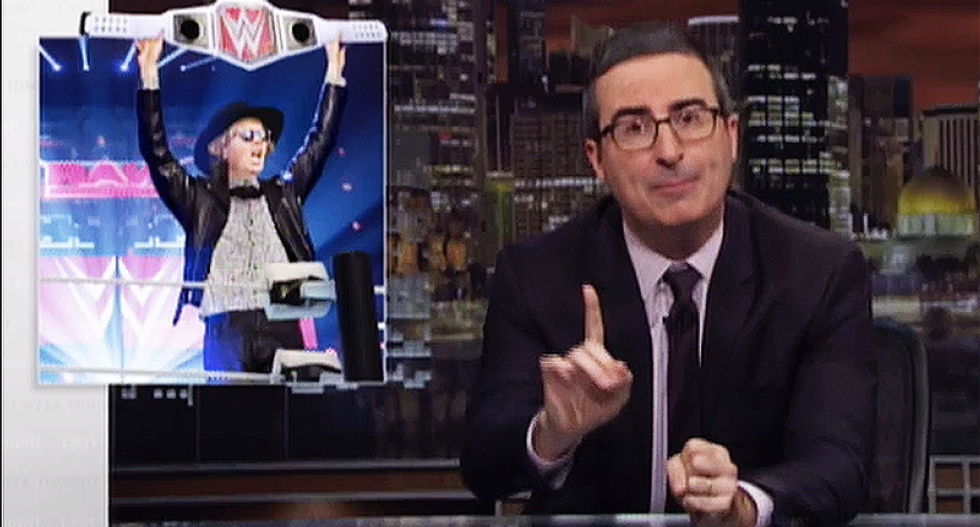 HBO host John Oliver issued an epic takedown of World Wrestling Entertainment (WWE) for the upcoming show they're planning for Saudi Arabia. Following the brutal assassination of a Washington Post reporter by the Saudis, fans aren't exactly keen on watching their favorite wrestlers saunter overseas to promote a hostile nation.

"Very, bad original concept?" Oliver asked. "You're the president addressing the assassination of a permanent resident of the United States, not a Netflix executive deciding whether to greenlight a new series."

Among the companies catching flack for their relationship with the Saudis, the WWE, which signed a 10-year contract to stage events in the country. In April, the WWE held an event called the "Royal Rumble," which contained loads of propaganda for the Saudi government. The next event is scheduled for Friday where "Crown Jewel" will similarly promote the country to WWE fans.

The problem the company is now facing, however, other than the optics, is that their fans have turned on them. Oliver showed a clip of The Undertaker being cheered by fans until he mentions the "Crown Jewel." At that point, the fans begin to boo.

"Holy sh*t!" Oliver exclaimed at the booing fans. "I think the WWE itself just turned heel. I mean, do you know how clearly, deeply, bad something has to be to get wrestling fans to boo a wrestling event at a wrestling event?"

He noted it was the kind of response one would expect if someone like musician Beck won the WWE. And that's when Oliver slipped in his knock on Scientology.

"It's totally plausible, by the way, because he's a Scientologist and they give you superpowers," Oliver explained. "It's not just a religion. It's a set of principles that help you to understand and improve your life and maybe fly. Just look into it. That's all I'm compelling you, sincerely."

All of it puts the WWE in an awkward position for not only the event itself but the promotion for the event. Watch the video below as Oliver explains why: