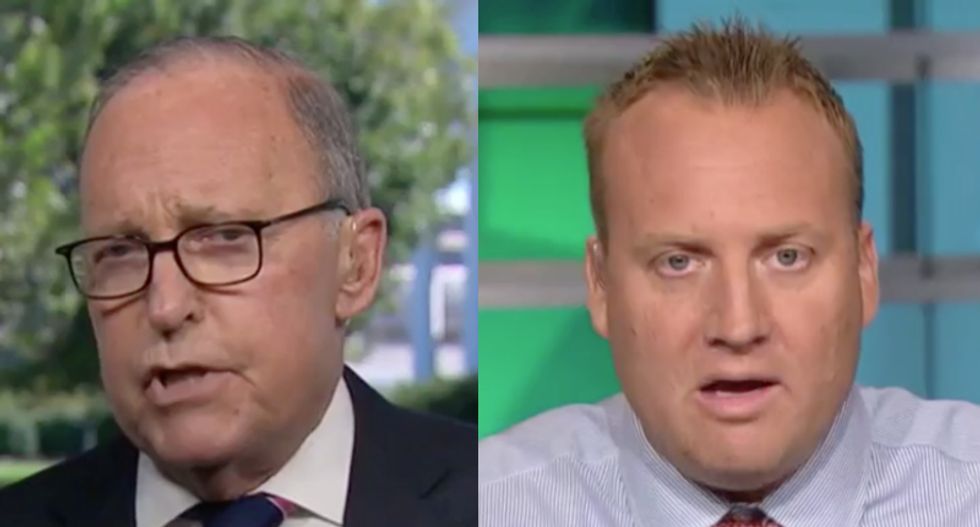 President Trump's Director of the National Economic Council and former CNBC host Larry Kudlow visited his old network on Friday, where he made a series of rosy projections that were promptly smacked down by CNBC financial analyst Josh Brown.

"We have such a strong economy, we're growing over 3%, maybe as much as 4%, with very little inflation, historically low interest rates," Kudlow said, refusing to acknowledge the worries of CEOs who say Trump's tariffs are hurting their businesses.

"Money is flowing into the United States from all across the world. We are the hottest economy by far," he added. "I think this stuff will play out very, very positively."

That didn't sit well with Brown, himself the CEO of Ritholtz Wealth Management.

"I hope that all of the things he said are going to come to pass," Brown said. "If that is the reality, and that's the future, then things will be good for most people."

"Unfortunately, things have a habit of not necessarily being the way any particular White House says they are," he added, before taking a wrecking ball to Kudlow's credibility.

"Understand that Larry Kudlow in 2006 and 2007 was writing articles about 'it's the greatest story never told', 'the boom lives on', 'the recessionistas are wrong the pessimists are wrong'," Brown said, mocking Kudlow's record. "In December 2007, basically 'there is no recession'. And of course, that was the first month the recession had started."

Brown was just getting started.

"It's hard to say that someone in his role is going to be objective and is going to be able to see what's coming ahead of other people," he said. "Let's be honest with ourselves. When you have a Republican tax cutting president in the White House, Larry Kudlow's gonna be happy and optimistic. But it just doesn't always work out that way."