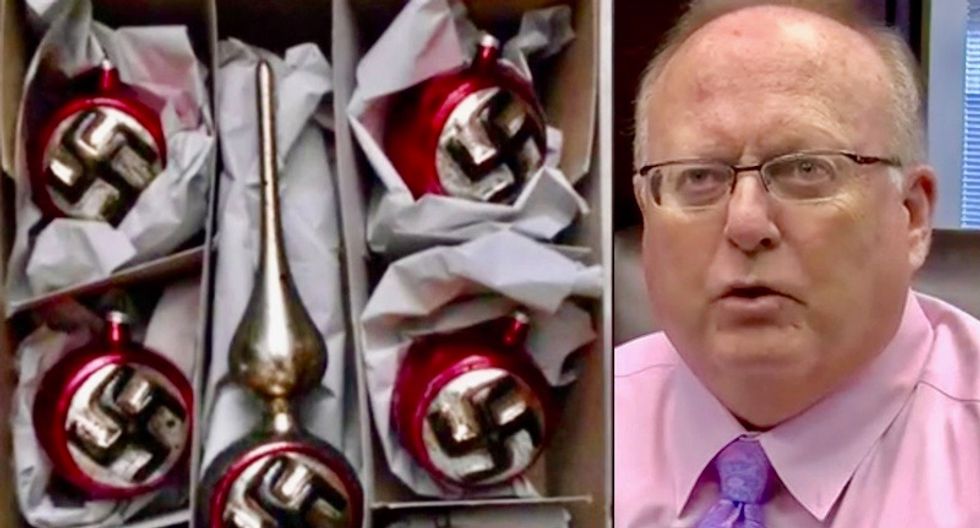 A gun show in Kentucky has come under fire after allowing the sale of Nazi memorabilia and a Klansman's robe, reports WAVE 3.

The event happened at National Gun Day which was held at the Kentucky Expo Center in Louisville.

Among the vendors was Florida's Walter Kanzler Guns and Militaria, which features a Nazi hat with a swastika on its homepage.

Among Walter Kanzler's offerings were World War II Christmas ornaments that featured swastikas, which were for sale on the same day that an anti-Semitic gunman killed 11 at a Pittsburgh synagogue.

The Klansman's robe was for sale not far from the Louisville-area Kroger where two black shoppers were killed in what appears to be a racist attack.

The Courier Journal showed the Kentucky State Fair Board photos of the memorabilia, which is now eyeing a ban on Nazi memorabilia.

"The most upsetting part is what the meaning of these symbols have and to allow those to be sold on Kentucky Venues property when I’m chairman of the board, I really find that offensive to myself as well, it’s just not right,” said the board's chairman Dr. Mark Lynn said.

Reached for comment, Walter Kanzler said there’s "no political agenda" and that it represented an "interest in history."

Rupert Murdoch to give deposition in Dominion's $1.6 billion lawsuit against Fox News: report

On Monday, The Washington Post reported that billionaire media tycoon Rupert Murdoch will be deposed as part of a $1.6 billion defamation suit by Dominion Voting Systems against Fox News.

"The lawsuit alleges that the network purposely aired false claims about Dominion’s role in the 2020 presidential election to boost ratings and fight off competition from more-conservative-leaning television networks," reported Jeremy Barr and Rachel Weiner. "According to the filing, Murdoch’s deposition will be conducted remotely, via videoconference."