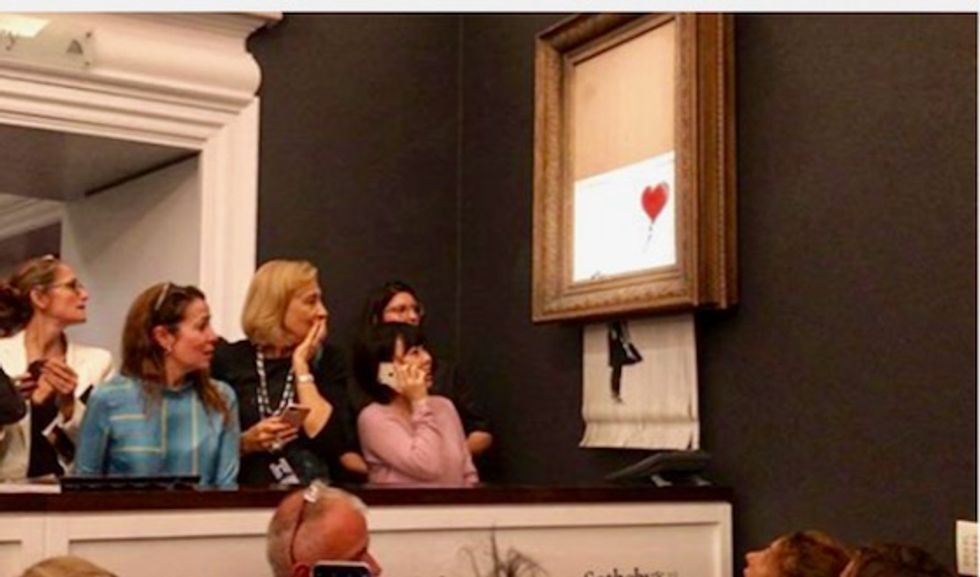 Paris auction house Artcurial held its breath Wednesday ahead of the sale of four works by Banksy, unsure what to expect following the enigmatic artist's shredding of a painting just moments after it went under the hammer.

Artcurial said security would be tight for Wednesday evening's sale and that this time, no hidden shredding devices appeared to be concealed in the frames -- but with Banksy, you just never know.

"We are going to be particularly vigilant. We've put security measures in place but we'll be looking to keep it discreet and as light as possible," Arnaud Oliveux, the contemporary art specialist in charge of the sale, told AFP.

Banksy, a British street artist whose identity is known to only a handful of friends, caused a sensation this month when one of his paintings began shredding itself, just after selling for $1.4 million (1.2 million euros).

Experts say "Girl with Balloon" is now probably worth even more because the stunt created such a massive media stir.

Oliveux predicted that if anything out of the ordinary happens in Paris, "it won't be a repeat" of the stunt that flabbergasted a room of champagne-sipping auction-goers at Sotheby's in London.

For one thing, the frames around the three paintings up for grabs are on the slender side, meaning it would be difficult to hide a shredding device of the kind used in London, which Banksy concealed under a thick wooden frame.

Artcurial has nonetheless done background checks on attendees -- not least after speculation that it may have been Banksy himself who triggered the shredding device inside the room at Sotheby's.

"We've asked them to identify themselves, we've made a few enquiries," Oliveux said.

The sale, which also features other celebrated street artists such as France's JR and US duo FAILE, includes three silkscreens by Banksy as well as a plastic statuette of a rat holding a paintbrush.

Oliveux acknowledged there was more interest in this sale than there would have been pre-shredding.

The Banksy works have been on show at Artcurial's elegant auction house on the Champs-Elysees roundabout, and many visitors have been pausing to take a look.

As for the shredding of "Girl With Balloon" -- now renamed "Love Is In The Bin" -- Banksy has admitted things didn't go according to plan.

He posted a video on YouTube showing it was supposed to have been fully shredded, and that during test-runs it worked perfectly each time.

But when the prank was finally carried out, only the bottom half of the painting shredded -- because, he revealed, it got stuck.

The woman who had just bought the work for £1,042,000 -- a female European collector whose identity has not been revealed -- said she was stunned when the device began whirring into motion.

"I was at first shocked, but gradually I began to realise that I would end up with my own piece of art history," Sotheby's quoted her as saying.

Alex Branczik, head of Sotheby's Contemporary Art in Europe, has meanwhile hailed the self-destructing painting as "the first artwork in history to have been created live during an auction".

"Banksy didn't destroy an artwork in the auction, he created one," Branczik added.