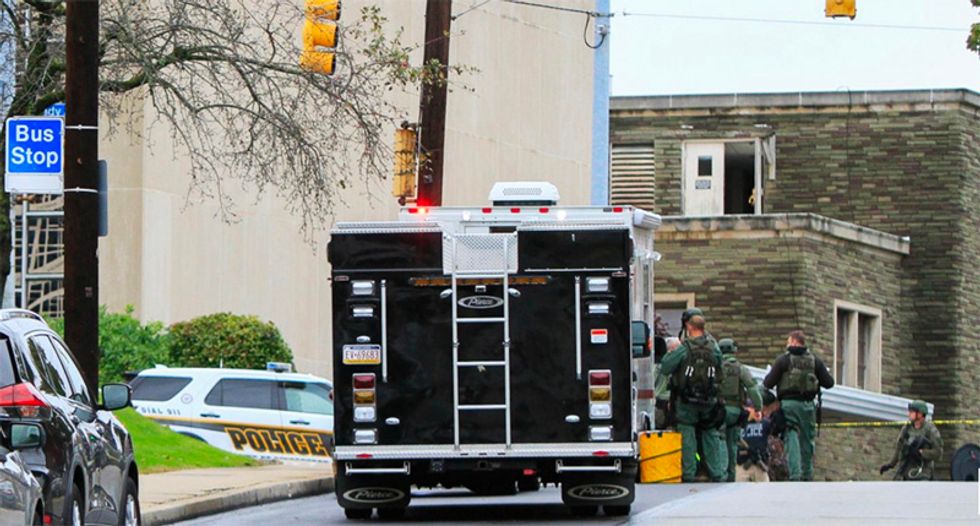 The suspect in Saturday’s mass shooting at a Pittsburgh synagogue is a 46-year-old local man named Robert Bowers who posted anti-Semitic messages on social media.

While authorities were not officially naming the man taken into custody after the killings at the Tree of Life synagogue, a federal law enforcement official and a Jewish community security official confirmed Bowers’ identity.

Two hours before the gunman burst into the synagogue and opened fire during a Shabbat religious service, Bowers posted on chat site Gab.com about the Hebrew Immigrant Aid Society (HIAS), a non-profit that helps Jewish refugees relocate to the United States.

“HIAS likes to bring invaders in that kill our people. I can’t sit by and watch my people get slaughtered. Screw your optics, I’m going in,” wrote Bowers, a described as a white male, heavy set, with a beard.

Gab.com said in a statement that when it learned of the shooting suspect’s profile on its site, it took “swift and proactive” action to contact law enforcement immediately.

Gab, which promotes itself as a free-speech alternative to the more heavily policed Twitter, said it backed up the user data and suspended the account, then told the Federal Bureau of Investigation about the data held by the company.

“Gab unequivocally disavows and condemns all acts of terrorism and violence,” the company’s statement said.

An archive of Bower’s posts since he joined the site in January appeared to show an angry, anti-Semitic man who shared messages such as: “Daily Reminder: Diversity means chasing down the last white person.”

About a month ago he posted pictures showing what appeared to the results of his target practice at a shooting range, and a collection of three handguns that he called his “glock family.”

Bowers, who is a registered voter with “no affiliation” in Allegheny County, Pennsylvania, took aim in one post at U.S. President Donald Trump, accusing him of being a “globalist” who did nothing to stop the “infestation” of the United States by Jews.

“For the record, I did not vote for him nor have I owned, worn or even touched a MAGA hat,” he wrote. MAGA is an acronym for Make America Great Again that is frequently used by Trump.