Rocket failure astronauts will go back into space: Russian official 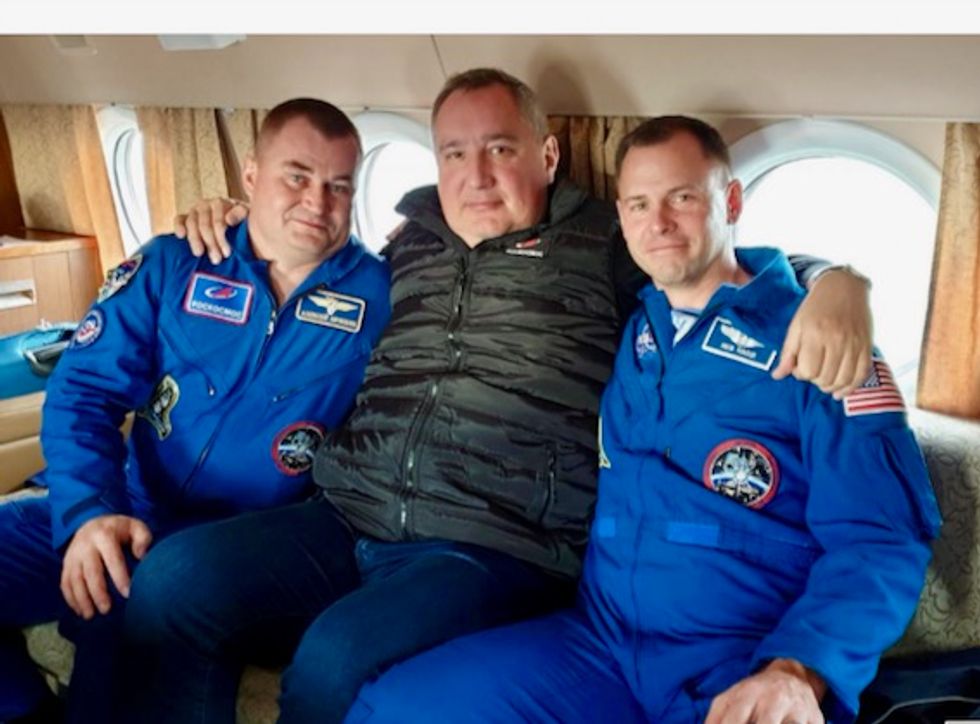 Head of Russian space agency Roscosmos Dmitry Rogozin (C) poses with astronauts Alexey Ovchinin of Russia and Nick Hague of the U.S., who survived the mid-air failure of a Russian rocket, on onboard a plane during a flight to Chkalovsky airport near Star City outside Moscow, Russia October 12, 2018. Russian space agency Roscosmos/Handout via REUTERS.

Two astronauts who survived the mid-air failure of a Russian rocket will fly again and are provisionally set to travel to the International Space Station (ISS) in spring of next year, the head of Russia’s space agency said on Friday.

Dmitry Rogozin, the head of Russian space agency Roscosmos, was speaking a day after Russian cosmonaut Alexei Ovchinin and American Nick Hague made a dramatic emergency landing in Kazakhstan after the failure of the Soyuz rocket carrying them to the orbital ISS.

Thursday’s accident was the first serious launch problem experienced by a manned Soyuz space mission since 1983, when a crew narrowly escaped before a launch pad explosion. Russia is now under pressure to prove its space program is safe or face losing lucrative fees to carry U.S. astronauts into space.

Moscow has suspended all manned space launches until it finds out what went wrong and Rogozin has ordered a state commission to investigate. Russia’s Investigative Committee has also opened a criminal investigation.

Sergei Krikalev, a senior Roscosmos official, said on Friday that Russia may also delay a planned unmanned cargo shipment by a Progress spacecraft to the ISS. Unmanned cargo launches carry food and other supplies to the ISS and use the same rocket system as the Soyuz. Russia says there is enough food on board to last until April.

Three people are now aboard the space station: a German, a Russian and an American. They were due to return to Earth in December, but may now be stuck there at least until January.

Roscosmos chief Rogozin on Friday posted a picture on Twitter of himself seated next to the two astronauts involved in Thursday’s accident, saying they had arrived in Moscow. Both men escaped unscathed and feel fine, Roscosmos has said.

Thursday’s mishap occurred as the first and second stages of the Russian rocket separated shortly after the launch from Kazakhstan’s Soviet-era Baikonur cosmodrome.

The Interfax news agency on Friday cited a source familiar with the Russian investigation as saying that an important valve had failed to open due to a faulty firing cartridge. That in turn had hindered the separation of the first stage of the rocket from its second stage.

NASA has relied on Russian rockets to ferry astronauts to the space station since the United States retired its Space Shuttle program in 2011, although the agency has announced plans for a test flight carrying two astronauts on a SpaceX commercial rocket next April.

NASA officials now must decide how or whether to maintain a U.S. presence on the $100 billion orbital research laboratory.

Space is an area of cooperation between the United States and Russia at a time of fraught relations. Asked about the mishap, President Donald Trump told reporters at the White House he was “not worried” that American astronauts have to rely on Russia to get into space.

Rogozin tweeted shortly before Thursday’s failed launch that he had signed a contract to send the first astronaut from the United Arab Emirates to the ISS. Interfax cited a source on Friday a saying that was now likely to be delayed by six months.