Sarah Sanders praises Trump for campaigning on day of bombs: 'The president could not have been more presidential' 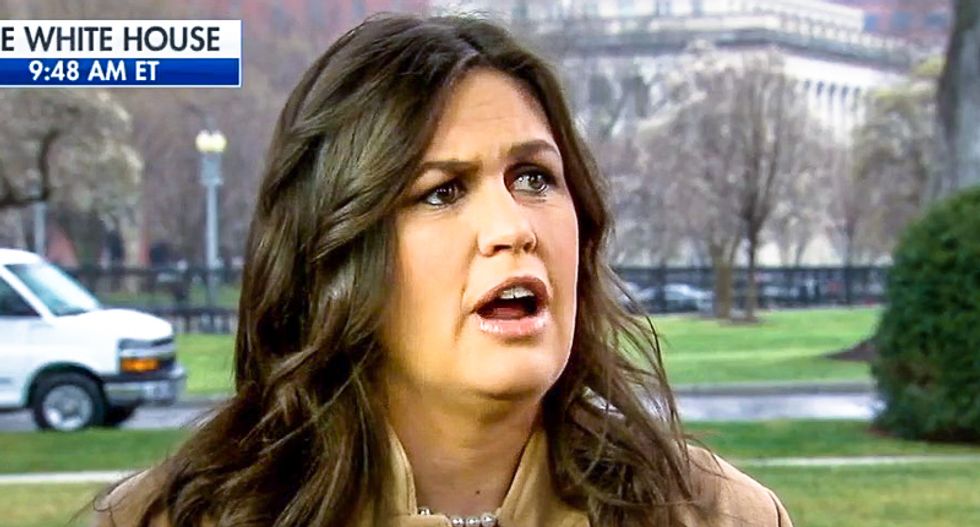 White House Press Secretary Sarah Sanders on Thursday praised President Donald Trump for his reaction to a series of mail bombs -- even though he did not say the names of the intended victims or contact them on the day of the event.

During an interview on Fox News, Sanders insisted that Trump had a "responsibility" to appear at a Wednesday night rally with Republican Gov. Scott Walker (WI) following the discovery of as many as seven explosive devices mailed to Democratic figures.

"But at the same time, we're condemning violence and calling on all Americans to come together," she said.

"Do you think the president could go further to further define he is competing on issues, not with people?" Fox News host Brian Kilmeade asked. "And that it is not personal. And maybe he could go that extra mile and further define that."

"There is a major political, philosophical difference between Democrats and Republicans," Sanders replied. "And there's nothing wrong with pointing those differences out. There is something wrong with taking that to a point of violence that we are looking at. The president has condemned that, all of us have."

Sanders then turned the conversation to violent speech against Republicans, although only Democrats had been targeted by the explosive packages.

"A NBC commentator said someone should wring my neck," Sanders complained. "And a Washington Post columnist said I deserved a lifetime of harassment."

Fox News host Steve Doocy noted that the president has been blamed for creating a political climate conducive to violence.

"I think it is absolutely disgraceful that one of the first public statement we heard from CNN yesterday was to put the blame and the responsibility for this despicable act on the president," Sanders griped. "The person that is responsible for this is the person who made and created and put these suspicious packages in the hands and in the arms of innocent American citizens."

The press secretary also blasted intended bomb target John Brennan because he has said that Trump must take responsibility for creating a climate that fosters ¬political violence.

"The president could not have been more presidential yesterday," Sanders opined. "He condemned this violence. Let's not get lost in who is responsible for this heinous act. It is the person who made and sent these suspicious packages."

Kilmeade asked Sanders to react to the fact that Brennan was "breaking with tradition" by becoming a "pundit" after heading the CIA.

"I think we've made our opinions on former Director Brennan pretty clear," Sanders stated, "We certainly don't support the type of activity that he is engaged in."