'It's a scary time': Trump surrogate says GOP in danger because witches put a 'hex' on Brett Kavanaugh 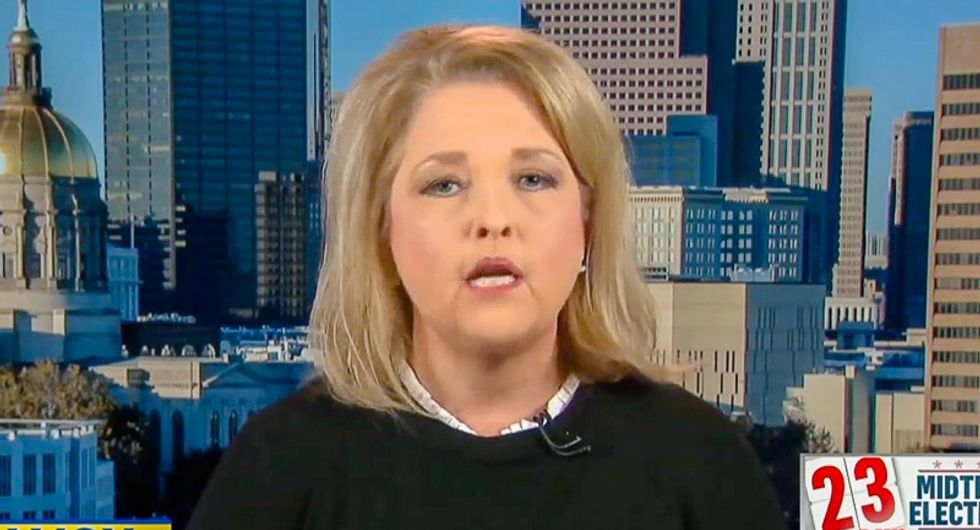 Amy Kremer, who runs a women's group supporting President Donald Trump, on Sunday asserted that Supreme Court Justice Brett Kavanaugh was a victim of a hex, which was put on him by witches.

During a Sunday segment on MSNBC, host Ali Velshi noted that Republicans have painted Democrats as "mobs" and "gangs."

"This has just shown up in the last couple of weeks aggressively in the president's rallies and in some other rallies by Republicans," Velshi said.

"I think -- the left -- there are mobs going on out there right now," Kremer insisted. "I mean, look at what happened to Sen. Ted Cruz (R-TX) and his wife, Heidi -- a mob running them out of a restaurant."

"[Democratic Congresswoman] Maxine Waters telling people that if you run across any of these Republicans congressmen or senators or people in the administration to harass them," she continued. "Get in their faces at gas stations. And people are doing that."

Kremer recalled to the panel that Rep. Steve Scalise (R-LA) was shot in 2017 while playing baseball.

"It is a scary time right now," Kremer opined. "Now you've got witches that are placing a hex on Brett Kavanaugh."

Kremer was mostly likely referring to a group of witches in Brooklyn who vowed to publicly place a "hex" on the Supreme Court justice. Kramer did not explain how the "hex" is equivalent to harassing Kavanaugh.

"It is concerning," she concluded. "This type of behavior is going on and its concerning to all Americans out there. As I said to you in the last segment, I have been a victim of these attacks."

Velshi reminded Kremer that most MSNBC host have also been targeted by conservative Trump supporters.