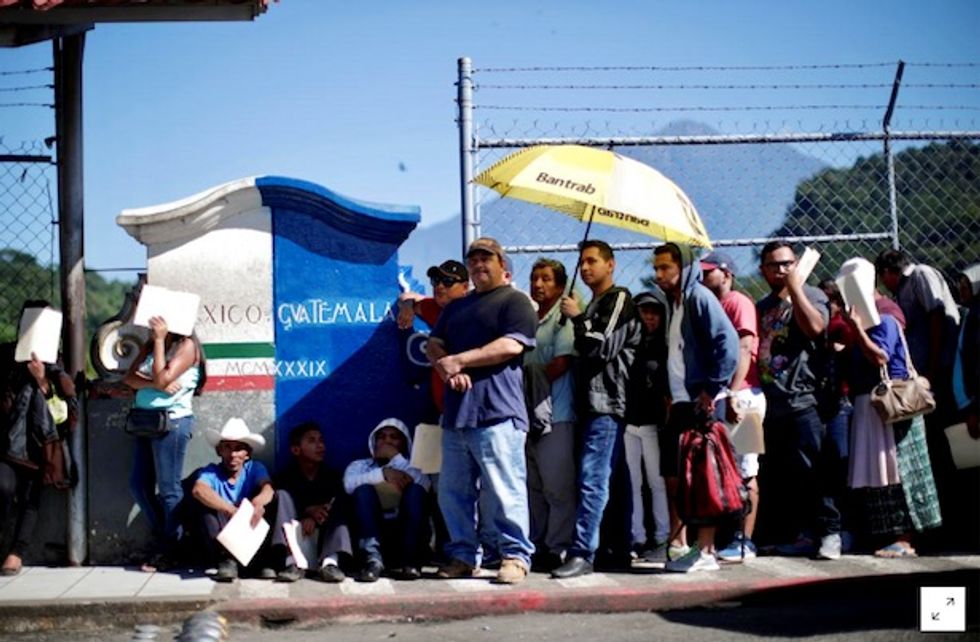 Central American migrants queue at a border connecting Guatemala and Mexico while waiting to cross into Mexico, in Talisman, Mexico October 23, 2018. REUTERS/Ueslei Marcelino

A group of more than a thousand Central Americans in Guatemala headed toward the Mexican border on Tuesday as the first caravan of migrants paused in southern Mexico on its planned journey toward the U.S. border.

U.S. President Donald Trump has vowed to begin cutting millions of dollars in aid to Central America and called the caravan in Mexico a national emergency as he seeks to boost his Republican Party’s chances in the Nov. 6 congressional elections.

The caravan, which has been estimated at 7,000 to 10,000 mostly Honduran migrants fleeing violence and poverty in their homelands, is currently in the town of Huixtla in Chiapas state around 31 miles (50 km) north of the Guatemalan border.

Mexico’s government said in a statement on Tuesday that it had received 1,699 requests for refugee status, including children. The government estimates there are around 4,500 people in the group.

Hundreds of migrants were resting in Huixtla on Tuesday, as religious groups and companies donated clothes. Local authorities provided vaccines, food and drink.

“When we heard the caravan was coming (we joined)...people in Guatemala are also suffering from poverty. So this is an opportunity to improve my family’s life,” said Elsa Romero, a Guatemalan mother of four.

Separately, Casa del Migrante, a migrant shelter in Guatemala City, said more than 1,000 people who set out from Honduras were moving through Guatemala toward the Mexican border. Some local media said there were more than 2,000.

Trump and fellow Republicans have sought to make the caravan and immigration issues in the election, which will determine whether their party keeps control of the U.S. Senate and U.S. House of Representatives.

Honduran authorities say that at least two men have died so far on Mexican roads during the advance of the caravan. One of the men fell off a truck in Mexico, and the other died trying to get onto a truck in Guatemala, authorities said.

Mexico, which has refused Trump’s demands that it pay for a border wall between the countries, tries to walk a fine line between showing solidarity with the Central American migrants and responding to Washington’s demands to control its borders.

Mexico hopes to disperse the convoy long before it can reach the border, telling migrants to register with authorities in order to submit applications for asylum in Mexico.

That process can last weeks, and migrants are supposed to stay where they register while applications are processed. If they violate those rules, they face deportation.