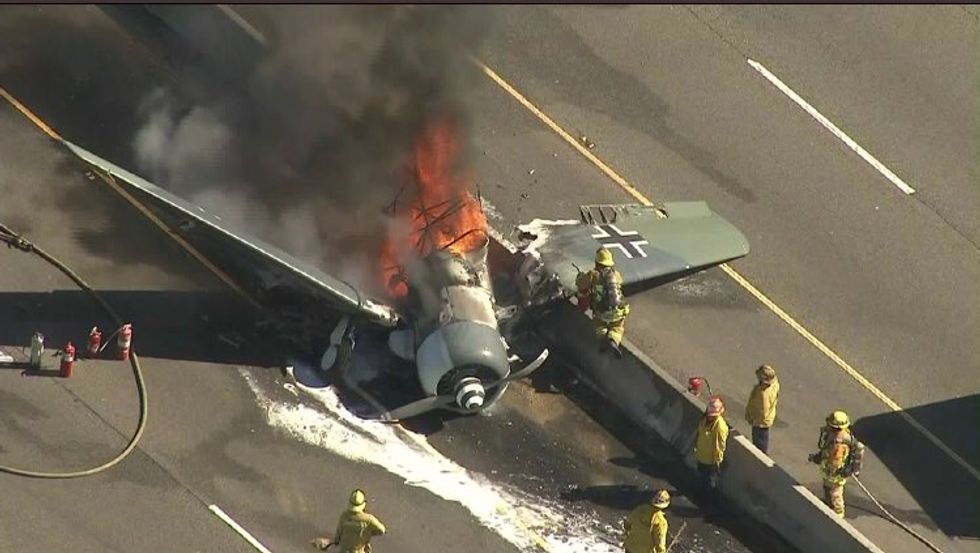 A plane with alleged Nazi markings crashed on the 101 highway near Calabasas, California. Image via Twitter.

A small plane crash on the 101 highway in Los Angeles County Monday resulted in lane closures and many confused viewers who observed that it resembled a Nazi-era Luftwaffe craft.

KTLA 5 reported that the pilot of the "vintage aircraft with camouflage paint" was removed from the craft and did not sustain any injuries from the crash that occurred near Calabasas, California.

Many who saw photos of the crash on Twitter, however, noticed that the plane's unique markings — especially the black "iron cross" with a partial white outline — made it look a lot like a World War II Luftwaffe (German for "air force") plane.

"A plane with the markings of the WWII Nazi Luftwaffe just crashed on a Los Angeles freeway," user Leah McElrath tweeted. "Yes, really."

"I thought today had a lot of overwrought Nazi comparisons, but then [Luftwaffe planes] started falling out of the sky," Jim Geraghty of the conservative National Review magazine tweeted.

I thought today had a lot of overwrought Nazi comparisons, but then a Luftwaffe planes started falling out of the s… https://t.co/98XyNhCJGs
— Jim Geraghty (@Jim Geraghty)1540330839.0

Another user noted that this isn't the first time a Nazi Luftwaffe-themed craft had crashed onto a highway, linking to a July 2017 article from the Atlanta Journal-Constitution about a similar crash outside of Atlanta.

@AthertonKD this is, incredibly, not even the first time that "luftwaffe cosplayer crashes on freeway" has been in… https://t.co/kUPLfqZiUe
— Will (@Will)1540331440.0

Check out more tweets about the crash below: