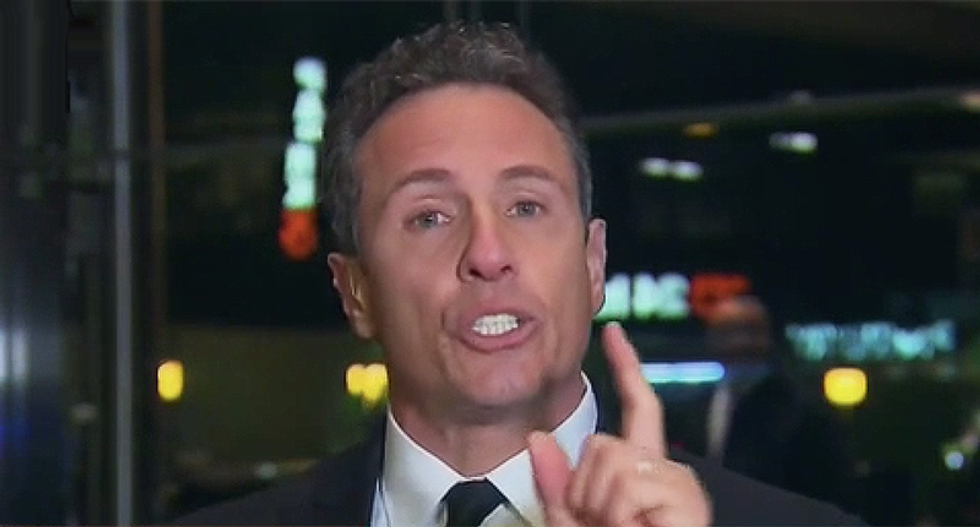 CNN's Chris Cuomo did his Wednesday night commentary calling President Donald Trump onto the carpet for inciting violence with the attacks he's made on Democrats.

"Can we do something about what might have inspired it?" Cuomo asked of the bombs sent to the Democratic leaders. "I want to say the answer is yes. We all know this atmosphere is too main. We're concerned the by negativity. Insults are now a proxy for insights on all sides. But I'm not one who sees equal blame spread all around. Our president cannot escape special scrutiny. He is at the head of the hate parade and way too often."

He noted Trump was reading prepared remarks at the rally in Wisconsin, and it seemed like he did "not give a damn."

"He showed tonight that he will not be the one to make the change," Cuomo continued. He never spoke about his own words or deeds, not once. And on a day that his opponents were targeted, he didn't even name them, let alone extend a branch. Two former presidents and their wives, their families, one of them his former election rival. And then he put it on us, the media, and us alone to be better and less negative. Unbelievable. And the crowd roared."

Cuomo noted that Trump is the one that considers his opponents "the enemy" and even calls the free press the "enemy of the people." Trump celebrates violence toward the media, and when CNN got a pipe-bomb sent to them, he didn't even mention it. What makes matters worse, "he likes it."

"When he's counseled that the presidency demands different behavior from within, he refuses," Cuomo continued. "When he's told that he is factually wrong from without, he doubles down. More and more he just flat-out lies, even when he's told that he's calling himself something that is ugly and divisive, he doubles down. I am a nationalist. Jingoism, really? Come on. We are better than this."

But Trump is only part of the problem, according to the CNN host. He talked about the series of "extreme" ideas and agendas that grows an even greater division in the country. He blamed twisting the truth with the express effort to deceive. Those "fake news" creators, he called far from journalists, but "jingoists and frauds."

"Just hours after the discoveries today, before we knew a damn thing without a shred of proof, they started blaming Democrats," Cuomo said of the right-wing sources.

He closed by saying that its apparent Americans can't count on the president to be the leader for a better America, but Americans themselves can be the leaders. As a democracy, we are a people-powered nation, Cuomo argued. That people power has achieved great strides for civil rights, women's rights, LGBTQ rights, and surely Americans can lead the strive against hate once more.

Watch the empowering commentary below: