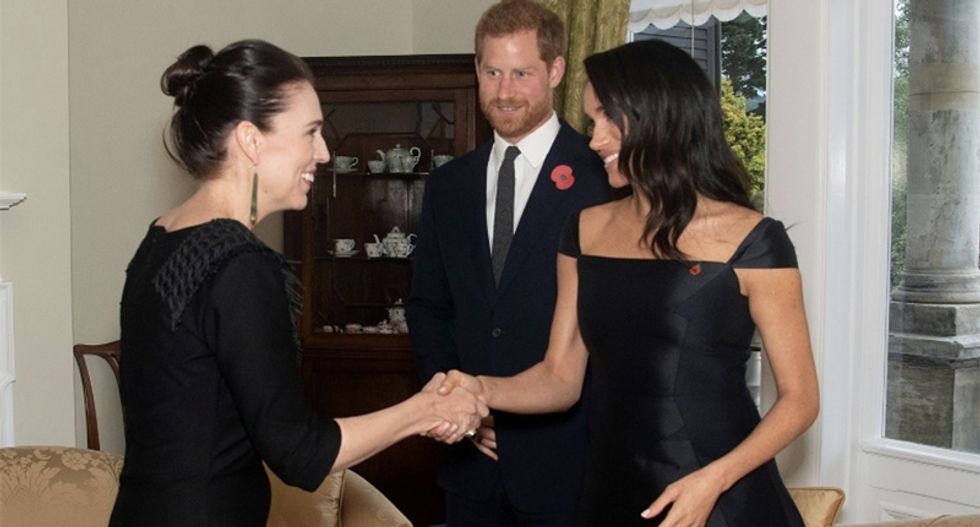 Prince Harry and wife Meghan expressed their admiration for mental health workers at a beachside morning tea in New Zealand Monday, returning to an issue that has been a recurring theme on their jam-packed Pacific tour.

Sitting alongside pregnant wife Meghan at the Maranui Cafe in Wellington's Lyall Bay, Harry was unstinting in his praise for the gathered mental health advocates.

"I take my hat off to you guys," he told members of Voices of Hope, which aims to prevent youth suicide.

"Everyone needs someone to turn to right?"

Meghan, sipping from a cup of tea and wearing a grey Club Monaco trench coat to ward off the Wellington chill, added: "You're all doing really excellent work."

The couple are in New Zealand on the final leg of a marathon 16-day tour which has also taken in Australia, Fiji and Tonga.

The trip coincided with the 2018 Invictus Games in Sydney, an Olympic style sporting event for wounded soldiers that Harry helped found.

At the Games' closing ceremony on Saturday Harry spoke of the need to talk openly about anxiety, stress and depression, revealing his own struggles.

"I've been there, you’ve been there, and we now need to reach out to those who can never even imagine themselves in that place," he said.

Meghan has also used her first royal tour since marrying Harry five months ago to promote her own favoured causes, mainly female empowerment.

After arriving in Wellington Sunday to a traditional Maori welcome, including pressing noses with elders in a hongi greeting, she spoke at a reception honouring 125 years since New Zealand became the first country to give women the vote.

"Bravo New Zealand for championing this right 125 years ago -- for the women who well deserve to have an active voice and acknowledged vote, and for all of the people that this effort has paved the way for globally," she said.

After visiting the cafe, the royals were whisked away by helicopter for a hike and barbecue in the Abel Tasman National Park, before returning to Wellington to check out the capital's thriving film industry.