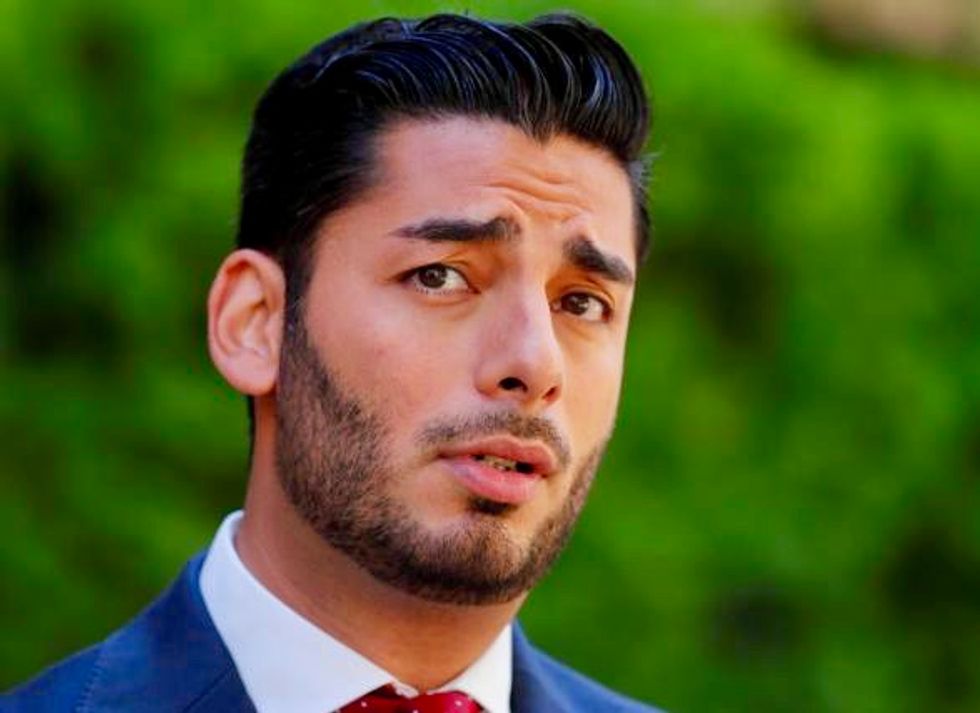 When a Democrat with Palestinian-Mexican ancestry who had never before run for office was elected to challenge a Republican incumbent in a staunchly conservative southern California congressional district, few gave him much of a chance.

But five-term U.S. Representative Duncan Hunter, who has been criminally charged with misusing campaign funds, is concerned enough about Ammar Campa-Najjar to issue a YouTube ad accusing his Democratic rival of trying “to hide his family’s ties to terrorism.”

It was a reference to his Palestinian grandfather, who was involved in a 1972 plot to kill Israeli athletes at the Olympics and was killed the following year by Israeli commandos.

The ad, released on Wednesday, shows Hunter, a former U.S. Marine who followed his father into Congress, dressed in camouflage and saying he approved the message.

He noted he had security clearances to work in the White House and the Labor Department under former President Barack Obama.

“If Hunter applied for that clearance under indictment, he would be denied, which is why (House of Representatives Speaker) Paul Ryan stripped him of his seat on the Armed Services Committee, because he would have access to confidential materials. That’s the irony of this,” Campa-Najjar said.

“I think he’s trying to tap into dark emotions and I don’t think people will rise to that,” Campa-Najjar said.

Hunter’s campaign did not respond to requests for comment.

Democrats need to pick up 23 House of Representatives seats in the Nov. 6 congressional elections if they wish to take a majority and serve as a more effective counter to U.S. President Donald Trump. Republicans can ill afford to lose normally safe seats like Hunter’s, in a district including San Diego, as they look to keep control of that chamber.

Polls show Hunter maintaining a comfortable lead over Campa-Najjar, though not as wide as his 27 percentage point margin of victory in 2016.

A Monmouth University Poll of 401 voters conducted between Sept. 22 and 26, found 53 percent of likely voters supported Hunter versus 38 percent for Campa-Najjar. The poll had a 5.3 percentage point margin of error.

Campa-Najjar’s campaign says its polling shows a much closer race.

The 29-year-old Democratic challenger is the son of a Mexican-American mother and a Palestinian father who immigrated from the Middle East. He stresses his Christian faith on the campaign trail and has tried repeatedly to distance himself from his Palestinian grandfather.

Hunter, 41, and his wife pleaded not guilty on Aug. 23 to charges of misusing $250,000 in campaign funds to pay for their children’s private school tuition, lavish travel including a trip to Italy and restaurant meals that cost hundreds of dollars. He has said the charges were politically motivated.

Hunter is not the only Republican congressman running for reelection while fighting criminal charges. U.S. Representative Chris Collins is also campaigning in a normally solidly Republican western New York state district while awaiting trial on insider trading charges that he has denied.

Both Hunter and Collins were early supporters of Trump, who early this month criticized Attorney General Jeff Sessions for allowing federal prosecutors to charge Republican candidates in an election year.

Campa-Najjar’s fundraising has outpaced Hunter’s, according to Federal Election Commission data through June 2018. Hunter’s campaign had reported contributions of $854,787, while Campa-Najjar had reported nearly $1.1 million.

Trump is 'bizarrely' making claims that may force Merrick Garland to indict him: Conservative analyst

On Thursday, writing for the National Review, conservative legal analyst Andrew McCarthy argued that last night's ruling by the U.S. Court of Appeals for the Eleventh Circuit nullifying Trump-appointed Judge Aileen Cannon's block on the DOJ's classified document investigation may have actually been a blessing in disguise for the former president — by relieving him of the need to make spurious legal claims that only put in him in further jeopardy.

"It would be hard to fathom a more conclusive rejection of Judge Cannon’s ruling, notwithstanding that the government’s appeal challenged just a slice of it," wrote McCarthy. "The Eleventh Circuit panel observed that on the most critical question before the court — namely, whether the government had exhibited a 'callous disregard' for Trump’s constitutional rights — even Trump did not claim such a thing, and Judge Cannon concluded there was no such evidence. That alone would have been sufficient grounds to deny Trump’s special-master petition, let alone to carve the classified documents out of it."

According to former federal prosecutor Elie Hoenig, if Donald Trump thinks the Supreme Court will intercede on his behalf after a devastating 11th Circuit Court of Appeals ruling on Wednesday didn't go his way, he will be sorely disappointed.

Breaking down just one of the former president's set-backs over the past week, the CNN legal analyst touched on a ruling by a three-judge panel from the 11th circuit that paved the way for the Department of Justice to continue their investigation into stolen documents the president was hoarding at Mar-a-Lago.

‘Fat Leonard’ arrested in Venezuela, ending 16 days on the run

Leonard Glenn Francis, the Malaysian defense contractor known as “Fat Leonard” who fled home arrest in San Diego earlier this month, was arrested Tuesday morning in Venezuela as he attempted to board an airplane at the Caracas international airport, according to the U.S. Marshals Service. The top Interpol official in Venezuela posted on social media that Francis, who orchestrated the worst bribery and corruption scandal in U.S. Navy history, was headed to Russia. He had traveled through Mexico and Cuba and was captured at Simón Bolívar International Airport in the Venezuelan capital. The arres...