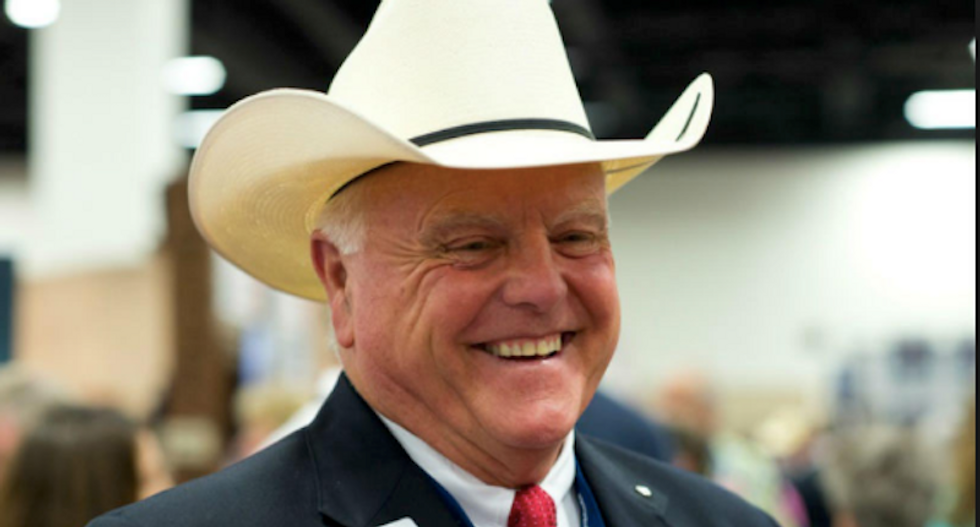 A Texas woman is under fire for posting a sign in her yard depicting a GOP symbol sexually assaulting a girl.

As Dallas News reports, Marion Stanford put up a sign in her yard that shows a GOP elephant symbol shoving its trunk under the skirt of a girl who says "help."

The poster is a reference to the allegations of sexual assault brought against Judge Brett Kavanaugh, as the Senate moves to confirm his nomination to the Supreme Court.

As Dallas News reports, Stanford expected the sign to stir up controversy. She did not expect to be attacked by lawmakers and have her sign taken by police

"Here we have a political party that is using women," Stanford told Dallas News. "I thought the sign represented what is going on now, and we can't just stand quiet. I wanted to tell people we could stop it with voting."

On Facebook, Sid Miller, a Republican agriculture commissioner, called her out and suggested that the sign pictured Kavanaugh's daughter.

'This is in Hamilton, Texas and is supposed to be Judge Kavanaugh's young daughter," he wrote. "Notice my opponent's sign in the background. The Democrat sleaze knows NO bounds!"

But Stanford contends that the poster does not depict Kavanaugh's daughter. There is no indication that the picture shows anything but a girl in pigtails.

“Police told me to remove the sign or they would take it and would arrest me,” Stanford said. “So I let them take the sign.”

"There is no basis I can see for removing the sign,” said Southern Methodist University law professor and First Amendment expert Dale Carpenter. “It’s not obscene, and no court would find it to be. You can say it’s offensive or distasteful, but that’s protected under the Constitution.”