Is Trump anti-Semitic? Here's what the evidence shows 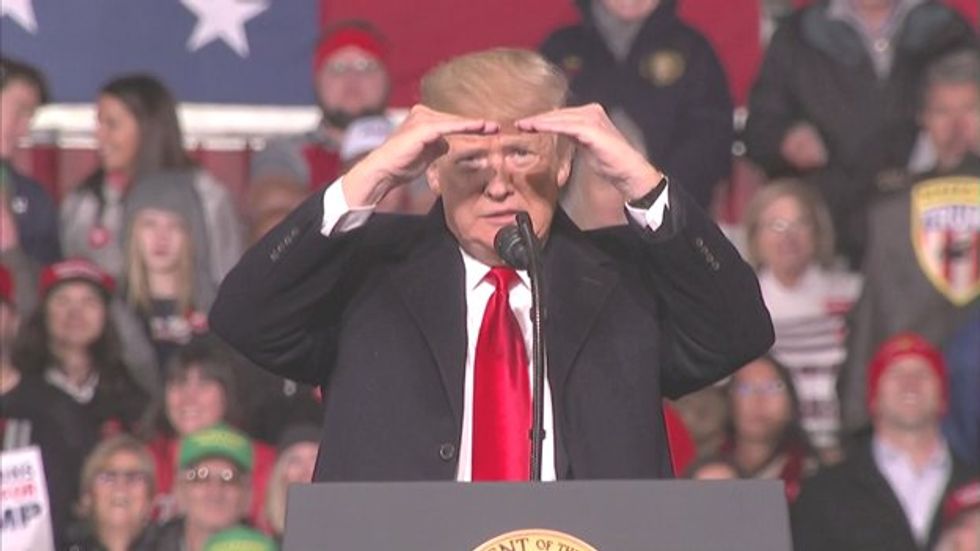 Is President Donald Trump anti-Semitic? After a shooter killed 11 people and wounded six others at a synagogue on Saturday, many observers said there was a clear connection between Trump's own bigotry and the devastating massacre.

Others responded by disputing that Trump can reasonably be accused of anti-Semitism. So which conclusion is correct?

Here's the case that the president's rhetoric has often been — and knowably so — anti-Semitic and likely to stoke bigotry toward Jewish people.

During his presidential campaign, Trump repeatedly used imagery and tropes known to be associated with anti-Semites and propaganda against Jews. On July 2, 2016, he tweeted an image of Hillary Clinton next to a Star of David against a background of cash. When this was criticized, he deleted the tweet. The image originated on a neo-Nazi forum, according to Mic. (Trump also retweeted other neo-Nazis during the campaign, including an account called @whitegenocideTM.)

Trump quickly deleted the Star of David tweet. But later, he defended it, saying it was a "Sheriff's Star," not a Star of David. This implausible excuse actually makes the original offense worse, because it sounds like an obvious wink and nod to anti-Semites. Someone who made a genuine mistake by promoting Nazi content would sincerely and profusely apologize.

Later in the campaign, Trump used vague and ominous rhetoric to describe nefarious "banks" trying to undermine the working class. While it's of course not out of bounds at all to criticize the banking industry, Trump's use of global conspiracy tropes came very close to echoing racist myths about Jewish people. He said:

It's a global power structure that is responsible for the economic decisions that have robbed our working class, stripped our country of its wealth, and put that money into the pockets of a handful large corporations and political entities. Just look at what this corrupt establishment has done to our cities like Detroit, Flint, Michigan, and rural towns in Pennsylvania, Ohio, North Carolina, and all across our country. ...

We've seen this first hand in the Wikileaks documents, in which Hillary Clinton meets in secret with international banks, to plot the destruction of U.S. sovereignty in order to enrich these global interest powers, her special interest friends, and her donors.

"The trouble is that—as has so often been the case this year—the language Trump has chosen to employ carries with it heavy cultural baggage," wrote historian Yoni Appelbaum at the time. "And whatever he intends, there are Americans who will find it frightening to hear these images revived—and others who will feel emboldened by their use to go where Trump himself did not."

Trump did not heed such warnings. He never seemed to take them seriously. When called upon to denounce figures like the former KKK leader David Duke, he did so with seeming reluctance and annoyance. He preposterously claimed that he didn't know anything about Duke.

And as author Jonathan Weisman pointed out Sunday, Trump's last ad of the campaign featured sinister images of Lloyd Blankfein, Janet Yellen, and George Soros — all Jewish — while warning of "global special interests." In reality, Trump has no objections to the Blankfein or Yellen, the chairman of Goldman Sachs and the former Fed chair, so it's hard to see why they would be singled out — except for the fact that their images play into the racist trope of a Jewish global conspiracy.

Before his entry into politics, there were also reports of Trump's anti-Semitism. A book by John O'Donnell reported Trump saying: "Black guys counting my money! I hate it. The only kind of people I want counting my money are short guys that wear yarmulkes every day."

As president, Trump's disturbing behavior has continued. There have been the major press relations flops, such as former Press Secretary Sean Spicer distorting the history of the Holocaust and a Holocaust remembrance statement that neglected to mention Jewish people.

When white supremacists and neo-Nazis marched in Charlotteville, Virginia, in 2017, they chanted, among other racists screeds, "Jews will not replace us." Trump famously said of this group's clash with counterdemonstrators that there were "some very fine people on both sides."

In recent weeks, Trump has been stoking fears about the caravan of migrants in Central America, despite the lack of evidence that they pose any threat to the United States. On of the conspiracy theories Trump has touted about this group is that they might be receiving funding from Democrats or other shadowy actors, including, once again, George Soros.

This claim feeds into a pernicious theory on racist far-right which holds that Jews are driving immigration to the U.S. in an attempt to destroy the country's way of life. This theory appears to be the motivation behind Saturday's attack at a synagogue, and Soros was one of the targets of a series of mail bombs allegedly sent by an extremist Trump supporter this week.

Nevertheless, Trump laughed as his supporters chanted "lock him up" about Soros at a White House event this week.

Sunday night, the Anti-Defamation League called out this type of behavior: "If your candidate is attacking Soros or the 'globalists' or a member of Congress from your party is embracing Holocaust deniers, you must stand up and tell them to stop."

Defenders of Trump have offered several responses to this ample evidence of Trump's anti-Semitism.

First, they typically point out that Trump's daughter, Ivanka, is Jewish. She converted after marrying Jared Kushner, who the president also appears quite fond of.

However, this only speaks to a very specific kind of prejudice. Prejudice can manifest in many different ways, one of which is personal distaste for every and any member of a particular group. It's true that Trump does not appear to have this form of prejudice against Jews, since by all accounts he loves his daughter and son-in-law. However, there are other forms of prejudice.

Another factor defenders of the president bring up is his support for Israel and his friendship with Prime Minister Benjamin Netanyahu. But while this relationship appears genuine, it is, again, not proof against Trump's anti-Semitism.

As Les Field, an anthropology professor at the University of New Mexico, has pointed out, it has sometimes been in Israel's interest to ally with anti-Semitic forces.

"Ironically, strident anti-Semitism in the United States and Europe is increasingly cloaked by political and economic alliances with Israel, a seeming paradox the Israeli government under Netanyahu has been all too ready to facilitate," he writes.

Often, anti-Semites and other racists argue against any intranational diversity. In this way, they may value Israel's desire for a strong Jewish state because it serves to separate the Jewish people from the rest of the world.

Finally, some might point to the fact that the worst anti-Semites, such as the suspect in Saturday's massacre, criticize Trump for not being anti-Semitic enough. But this doesn't exonerate Trump from accusations of anti-Semitism any more than the existence of slaveholders vindicates the racists who "only" argued for "separate but equal" treatment of black Americans.

There's a long and clear history of Trump endorsing, using, playing into, and winking at anti-Semitic propaganda and bigotry. It's also clear that, even when this is pointed out, Trump efforts to distance himself from this form of hatred are half-hearted at best. The most generous reading of the evidence is that Trump carelessly spews hateful rhetoric and racist tropes against Jewish people and then fails to back down out of self-righteousness and arrogance. But even on this reading, Trump is guilty of careless disregard for bolstering racist propaganda, and he values his own pride over standing up to bigotry.