At US Marine base, families plead for housing help after Florence 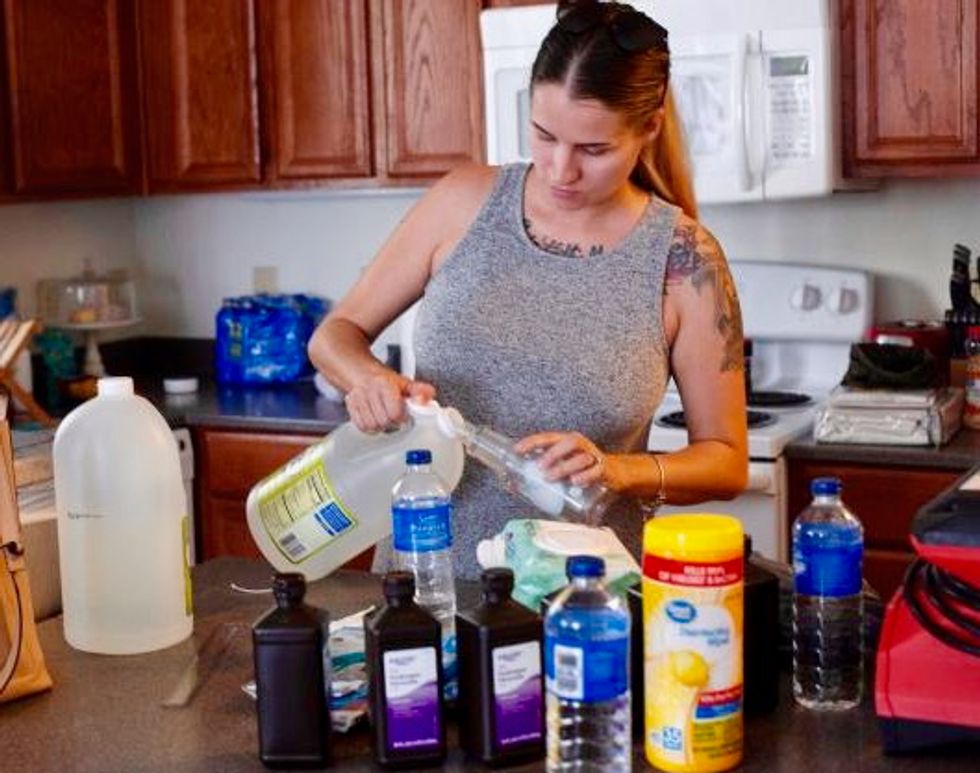 Some, like Jennifer Maher, said they feel unsafe in their Camp Lejeune homes but were told they will not be moved because assessment crews determined their houses are habitable.

That did not work for Maher, pregnant in her third trimester and living with her husband and 2-year-old son. When she returned home last Friday, she opened the door to the stench of mold, she said while showing the wreckage to a visiting reporter. Then she saw the ceiling had collapsed in their bedroom and garage.

“I’m pregnant and I can smell the mold,” said Maher, whose husband is a Navy corpsman stationed at Lejeune. “There’s no way I could bring a newborn home and let her breathe this in.”

Though an assessment crew noted the collapsed ceilings and standing water, Maher said, the housing manager told the family they would not be relocated. After she threatened to complain to the Inspector General’s office on base, she said her family was given temporary lodging. She is considering breaking her lease, since she does not know if her home will be repaired before she is moved out of the temporary place.

“I understand they have a lot to take care of,” Maher said of the housing manager. “But it’s hard when your housing company says, ‘I don’t know what to tell you, go find a shelter.’”

Other families shared similar stories this week with Reuters, as the Marine Corps and the base’s private housing companies perform triage from the fallout from Florence. A reporter visited the base, speaking with three residents in their damaged homes and interviewing two others, one off base and one by phone.

This year, Reuters has been examining safety and environmental hazards faced by U.S. military families on military bases, including cases of childhood lead poisoning. At Lejeune, some families described encountering troubles that reporters observed at other bases: lags in maintenance responses by private contractors that stir worries over health.

Most of Camp Lejeune’s housing is run by Atlantic Marine Corps Communities, or AMCC, a partnership between Australia-based Lendlease Group, Boston-based WinnCompanies and the U.S. Navy. All the homes profiled in this article are managed by AMCC.

Of the more than 4,600 homes the company operates at Camp Lejeune and nearby New River Air Station, 1,200 have undergone assessments. The inspections found 82 homes uninhabitable and requiring relocation, said 2nd Lieutenant Andrew Martino, a communications officer at Camp Lejeune. Another 267 suffered sustained damage but were habitable. A further 560 homes are operated by a different manager, Lincoln Military Housing, which has not reported serious damage, he said.

“Assessments are ongoing, but at the moment there is no timeline” for completing them, Martino said. “We’re just asking for patience around the base.”

On its website, AMCC acknowledges many of its neighborhoods suffered widespread damage. The company is allowing families to break leases without penalty through Oct. 13, but is not guaranteeing alternative housing on base unless homes are deemed uninhabitable, its website says.

“One of our top priorities is currently assessing the damage that has occurred as a result of Hurricane Florence,” the website says. “Damages will be prioritized for safety, with the most severe and pressing cases being addressed first.”

Civilian areas, too, are struggling to recover. An estimated 8,000 or more homes in the Carolinas suffered major damage, according to the American Red Cross.

At Camp Lejeune, the base held community meetings this week to address resident concerns. Phone lines, shut down earlier, have come back online. But some residents say they have received few answers about their problems.

Another expectant mother, Paige Schneider, said AMCC told her a collapsed ceiling and mold in her home were not enough to require a move. Schneider said she told housing officials she was due within a month, and that the mold was dangerous for a newborn. Excessive exposure to mold can pose a potential health hazard.

An AMCC employee, Schneider said, suggested she and her husband remove the mold themselves.

She opted to take refuge with a friend. She was only given alternative base housing on Thursday, 13 days after the storm, when a doctor intervened. The doctor provided a letter, reviewed by Reuters, recommending that she be moved or that the property manager remove the mold.

The living conditions, the doctor wrote, are “unsafe for her or her family to reside there throughout her pregnancy or to bring a newborn home to such conditions.”

“It’s crazy it had to get that far for anything to happen,” Schneider said.

As residents of coastal North Carolina prepared for Hurricane Florence’s arrival earlier this month, Camp Lejeune’s commander, Brigadier General Julian Alford, decided not to order service members and their families to evacuate. He told residents in a Facebook post he believed the base offered strong shelter in the face of a hurricane. Most of the base is not in a flood-prone area, he noted, and the base has withstood many big storms in its 77-year history.

Many families left anyway, paying out of pocket for hotels inland or scattering farther away to stay with family and friends.

No deaths were reported at the base. But some residents returned to find home ceilings caved in, drywall strewn throughout, standing water in bedrooms, and a coating of mold covering their belongings. Some homes went up to a week without power.

Onesja Johnson is waiting for her initial assessment. When she returned to the base over a week ago, she said she visited the housing office to say her ceiling was falling in and the mold made it hard for her to breathe.

Johnson is sleeping on the couch, while her husband is deployed. She said her mattress is soaked through. Though she was told by the housing office that someone would come by to put a tarp on her roof, no one has yet, she said. “I honestly have no idea what’s going on.”

She is not alone. After returning to a kitchen infested with roaches and a mattress covered in mold, Sombra Torres and her husband were initially sleeping in their living room and eating take-out food. Sombra, also pregnant, slept on a loveseat, while her husband improvised a bed from military gear on the floor.

After two days, she said, she began to feel ill and stayed with a friend.

“I’m unable to get ahold of anybody” at AMCC, she said. “I’ve called many times and haven’t been able to get through.”