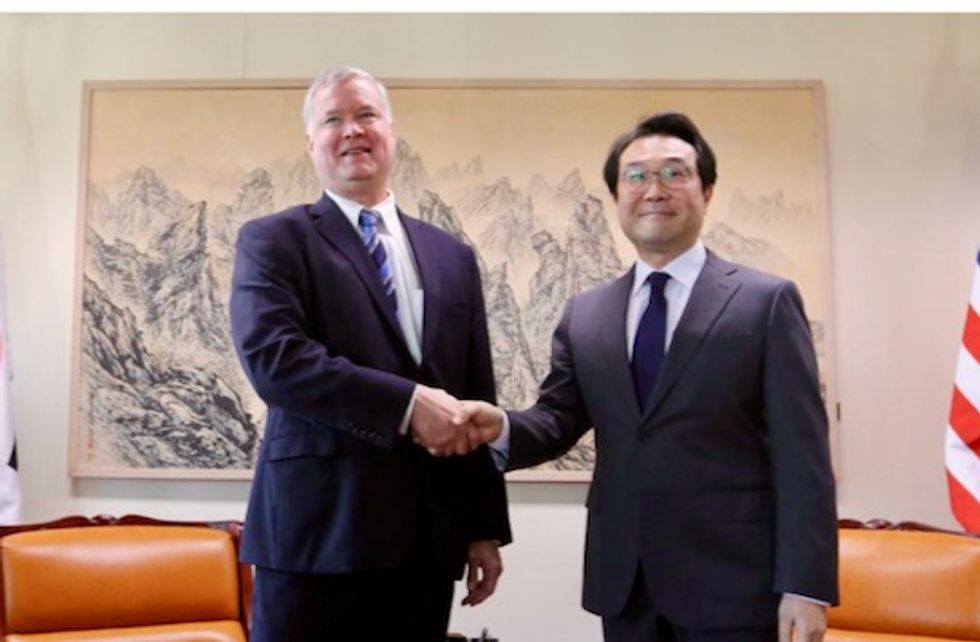 North Korea must take steps toward verified denuclearization before achieving the “shared goal” of an official end to the 1950-53 Korean War, a U.S. envoy said on Monday.

Stephen Biegun, U.S. special representative for North Korea, was in Seoul to meet senior South Korean officials, including his counterpart, Lee Do-hoon, amid rising signs of discord between the allies on North Korea.

South Korean President Moon Jae-in has forged ahead with efforts to engage with North Korea in recent months, raising U.S. concerns that Seoul could weaken pressure on North Korea to give up its nuclear weapons.

North Korean leader Kim Jong Un agreed in broad terms to work toward denuclearization during an unprecedented June summit with U.S. President Donald Trump, but has failed to satisfy U.S. demands for irreversible steps to scrap its arsenal, including a full disclosure of nuclear weapons and facilities.

In the talks in Seoul, Biegun said he was “absolutely certain” the United States and South Korea could work together to achieve their objective of North Korean denuclearization.

“We have a shared goal here, which is to bring an end to 70 years of war and hostilities on the Korean peninsula,” Biegun told Lee at the start of their meeting.

“And the primary requirement for us to get to the end point is to achieve final, fully, verified denuclearization of North Korea. I am absolutely confident this is within reach.”

South Korea’s Yonhap news agency quoted a South Korean diplomatic source as saying on Monday that U.S. Secretary of State Mike Pompeo would likely meet a senior North Korea official in the United States next week to discuss denuclearization and plans for a second summit between the two countries.

Pompeo said on Oct. 20 he was hopeful he would meet his North Korean counterpart “in the next week and a half or so.” Asked about the Yonhap report, a spokeswoman for the U.S. State Department said it currently had no meetings to announce.

Yonhap quoted its source as saying Pompeo’s counterpart would likely be Kim Yong Chol, a top aide to Kim with whom the U.S. diplomat held previous rounds of talks. The two met in New York in May to finalize the June summit.

North Korea and the United States have been at odds over whether the North’s denuclearization or declaring an end to the Korean War should come first. The war ended with an armistice, not a peace treaty.

Lee said Washington and Seoul were working to ensure they engage North Korea with a united front.

“Because the denuclearization process is at a critical juncture we need to meet up as often as possible to make sure there is no daylight whatsoever between our two allies,” he said.

The United States suspended some of its annual military drills with South Korea to facilitate talks with North Korea but has refused sanctions relief until Pyongyang takes concrete disarmament steps.

Reporting by Hyonhee Shin; Additional reporting by Josh Smith in Seoul and David Brunnstrom in Washington; Editing by Nick Macfie and Peter Cooney