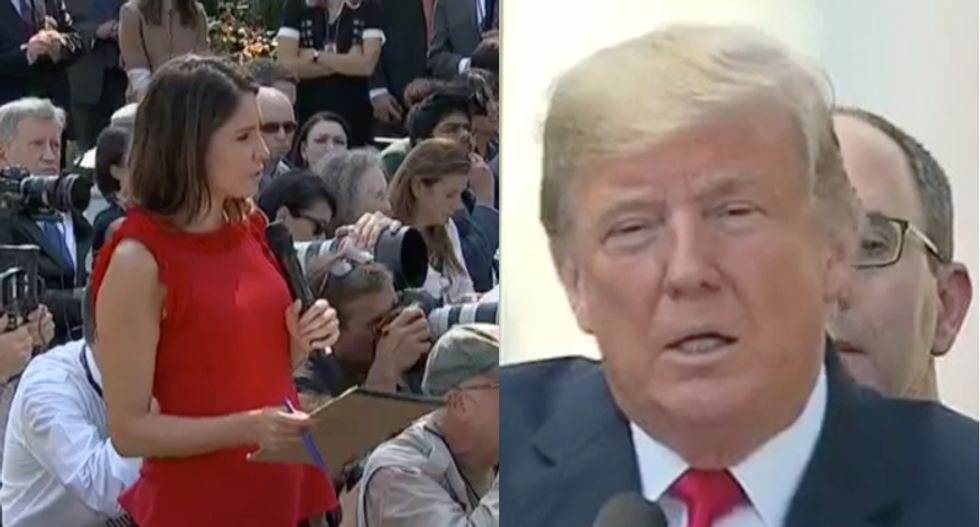 During a Monday press conference on the new trade deal between the U.S., Mexico, and Canada, President Trump hurled insults at a female reporter, and then immediately tried to pretend he had done no such thing when she called him out.

"She's shocked that I picked her," the president remarked into the mic, pointing at an unnamed female reporter while his staff laughed. "In a state of shock."

"I wasn't thinking, Mr. President," she began, but Trump cut her off.

"I know you are not thinking. You never do," he said.

"No, go ahead," the president responded dismissively. "Go ahead."

When the reporter asked about the White House's efforts to limit the scope of the FBI investigation into Brett Kavanaugh, Trump cut her off again.

"What does this have to do with trade?" the clearly irritated president asked, before cutting her off a second time. "How about talking about trade, we'll do that later."

The reporter dutifully asked if the president believed his trade deal could pass Congress. After he responded, she tried to pivot back to Kavanaugh, but Trump again declined to answer and moved onto another reporter.

The president has been criticized frequently for his treatment of women, and is an admitted adulterer. He was caught on tape days before the 2016 election boasting about grabbing women by the genitals.