'I was wrong': Matt Gaetz admits his 'caravan' conspiracy video is based on a lie -- but defends it anyway 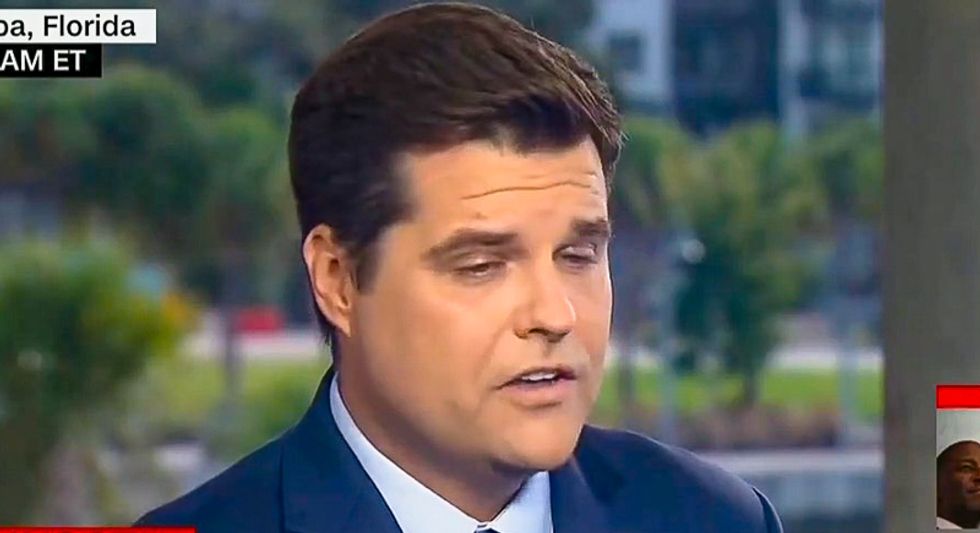 Rep. Matt Gaetz (R-FL) admitted on Sunday that he had provided false information when he tweeted a video of a "caravan" of Latinos who he suggested had been paid by liberal billionaire George Soros.

In a tweet last week, Gaetz sent a video of a group of people, who he said were from Honduras and asked if they were being paid by Soros to illegally come to the U.S. The video was later re-tweeted by President Donald Trump.

During a panel discussion on CNN, Gaetz conceded that he had been wrong about the video.

"I was wrong," Gaetz told CNN's Jake Tapper. "It wasn't in Honduras, it was in Guatemala. That tape was provided to me by Honduran government officials. It was collected by Central American intelligence officials. And I think we've got to learn a lot more about how these large organizations of people come together."

Gaetz said that he had learned that there were three groups: "the thugs, the organizers and then you have a lot of desperate migrants."

"You have those thugs forcing local businesses to turn over cash and resources," he continued. "That's a problem. If you have organizers working in concert with U.S. NGOs or left-leaning groups, that's also a problem."

Gaetz, however, failed to offer evidence that a liberal conspiracy was behind the caravan.

"I don't think we should be fear mongering," Sanders said. "There's a real conversation we need to have about immigration this country. Unfortunately, some folks -- your tweet included -- weren't having it."

"All I'm seeing is young kids overdosing on opioids," she opined. "And they are coming -- I never thought in any of our lifetimes we would see heroin in a pill form -- that is coming in to our country from Mexico!"