Argentine Navy submarine found a year after disappearing with 44 aboard 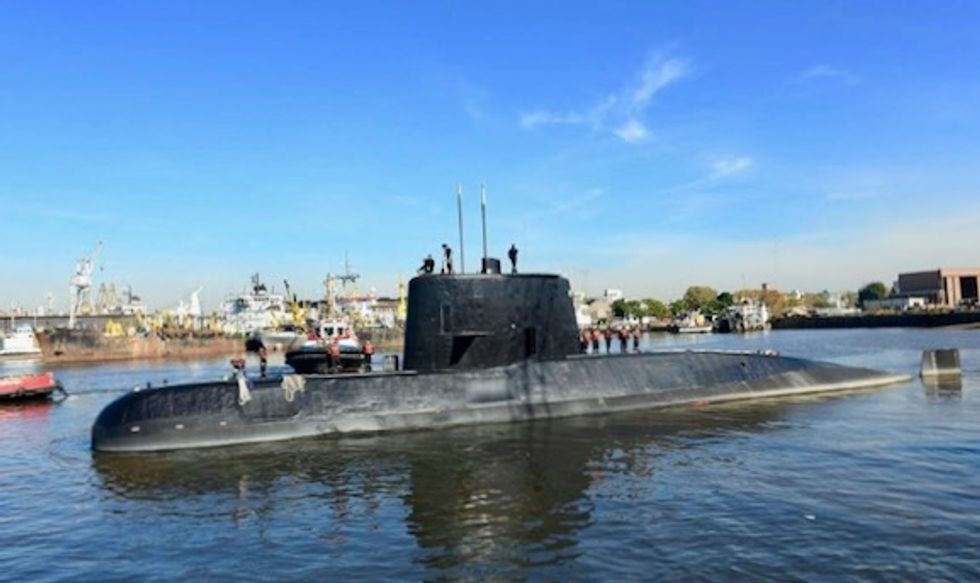 The wreckage of an Argentine navy submarine that exploded and disappeared a year ago was located in the Atlantic Ocean Friday, the navy said, crushing any remaining hope for relatives of the 44 crew.

There has been "positive identification of the ARA San Juan," at a depth of 800 meters (2,600 feet), the navy said on Twitter.

The Seabed Constructor, a vessel owned by US search firm Ocean Infinity, made the discovery. It had set out in September on the latest attempt to find the San Juan, whose disappearance cost the navy's top officer his job.

The navy lost contact with the San Juan on November 15 last year, about 450 kilometres (280 miles) from the Argentine coast while it travelled northward from the country's southern tip.

"I still had hopes that they could be alive," Luis Niz, the father of a missing sailor, told reporters, even though President Mauricio Macri's government had already declared there were no survivors.

"We are with the other relatives. They are going to show us the photos. They say that our youngsters are inside," said Yolanda Mendiola, the mother of crewman Leandro Cisneros, 28.

"We are all destroyed here."

The discovery came the day after a ceremony, which Macri attended, at the San Juan's Mar del Plata base on the first anniversary of its disappearance.

It also came just before the Seabed Constructor was to leave for maintenance in South Africa. Before setting off, the searchers decided to check an area which bad weather had previously prevented them from examining.

They "decided to do a new search and, thanks to God, it was able to find the zone," navy spokesman Rodolfo Ramallo told Todo Noticias TV.

"Now another chapter opens. From the analysis of the state in which the submarine has been found, we will see how to proceed," he said.

The Seabed Constructor is equipped with cameras that can be submerged to a depth of 6,000 meters (6,500 yards). It was to receive a reward of $7.5 million if it found the missing sub.

Before the latest search mission began, Luis Tagliapietra, whose son Alejandro was a lieutenant on the San Juan, described it as "the last opportunity to find them."

Ocean Infinity was also assigned the task of hunting for Malaysia Airlines flight MH370 which vanished without trace in March 2014 en route from Kuala Lumpur to Beijing.

Finding the sub's wreckage "is going to permit us to know more about this tragedy. At this depth we ought to be able to inspect and determine the cause of the accident," an Argentine naval officer said, requesting anonymity.

Experts say the sub would have been crushed by water pressure once it dropped below about 600 meters. They favor a hypothesis in which water entered through a defective valve of the submarine's snorkel, triggering the tragedy.

The loss of the San Juan was one of the world's worst submarine disasters in decades, and the first major tragedy to hit Argentina's navy since the Falklands War in 1982. Argentina, which refers to the islands as Las Malvinas, lost the war to Britain.

Argentina's navy has been fiercely criticized for its handling of the case since first reporting the submarine overdue at Mar del Plata on November 16, 2017.

It was only several days into the tragedy that navy officials acknowledged the old, German-built submarine had reported a problem with its batteries in its final communication of November 15.

Nearly 10 days later, the navy confirmed there had been an explosion on board, which experts said was likely linked to the battery problem.

TELAM/AFP / Diego IZQUIERDORelatives and friends of crew members on the ARA San Juan mourn during a ceremony at Mar del Plata's naval base on November 15, 2018, a year after the vessel disappeared

An air and sea search involved 13 countries, but the majority withdrew before the end of 2017.

Authorities have opened a criminal investigation and families of the missing crew had kept pressure on the government not to give up on the search.

"Now we want to know what happened," said Mendiola, calling for punishment of anyone guilty in the case.

"Can you imagine? There were 44 boys who were alive when they got on the submarine."