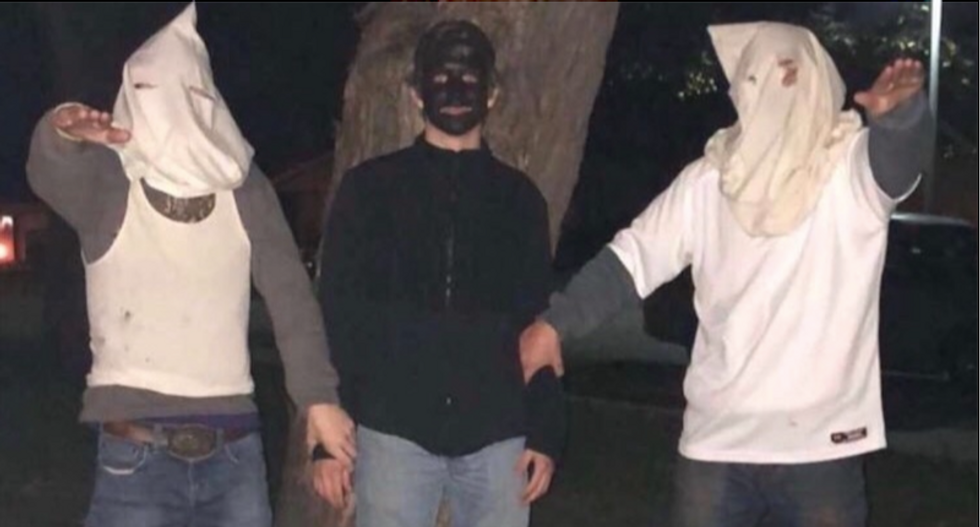 A photo circulated by high school students in Minnesota shows what appear to be teenagers wearing a highly racist costume, reports the Med City Beat.

The image shows two students in KKK robes, displaying a Nazi salute. The conceit of the costume appears to be that the Klansman have apprehended a black man—that's the third student, who's in blackface.

John Marshall High School, where at least two of the teenagers were students, issued a statement condemning the costume. "The social media post is not a reflection of what our district students and staff believes and feels,” the district said in the statement, which was also sent out to local media. “We will use this as an opportunity to talk, educate, and grow as a community as we work to become even stronger and more inclusive to all students.”

Meanwhile, an Army recruiter at the school said they were not welcome to join the US armed forces.

"Because the questionable conduct of these three individuals is inconsistent with Army values, they will no longer continue the process to become U.S. Soldiers,” said Marlene Bland of the 3rd Recruiting Brigade. “The Army does not tolerate inappropriate behavior by anyone within our ranks, [including] recruits who have signed a contract to join in the future. It is important for everyone on our team to live and demonstrate the Army values every day.”

The state might not seem like it would be a hotbed of KKK activity. But according to the Minnesota Historical Society, there were once fifty-one KKK chapters in the state.

"These men and women threatened and intimidated many including union members, people who supported the repeal of Prohibition and their own Jewish, African American and immigrant neighbors," notes historian Elizabeth Dorsey Hatle, who's written a book about the Klan in Minnesota.