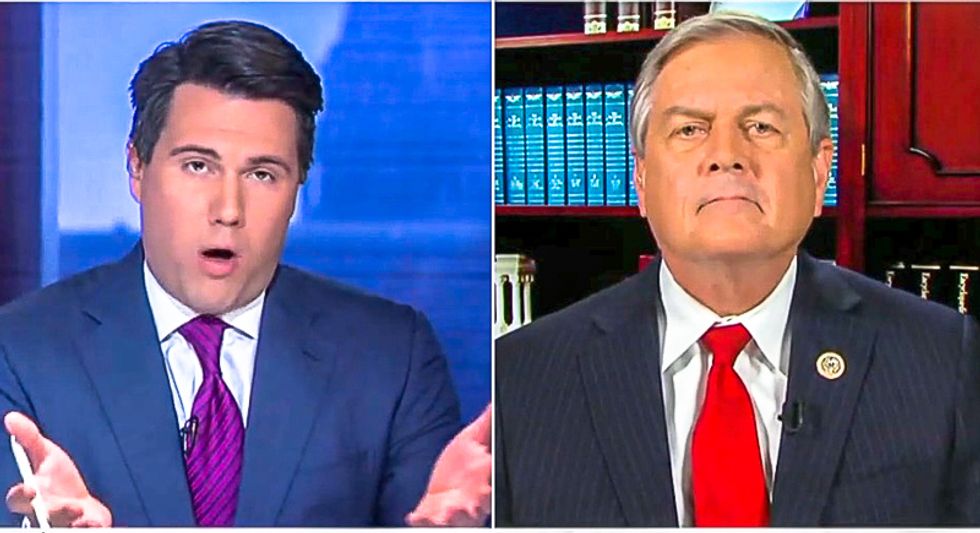 Fox News host Leland Vittert on Sunday challenged Rep. Ralph Norman (R-SC) to explain how President Donald Trump promise to shut down the U.S.-Mexico border would stop of caravan of asylum-seekers from entering the country.

"Any idea what a shutting down the border actually means?" Vittert asked Norman in an interview on Sunday.

Vittert, however, failed to understand how Norman's explanation applied to Trump's words.

"Congressman, we have the Border Patrol and they're still zillions of illegal immigrants coming across the border every day," Vittert said. "Does that mean you're closing it to trade as well, to every semi/tractor trailer that's going back and forth, to every U.S. citizen who wants to come back through the border? I'm confused."

But Norman insisted that the Trump administration would "figure those out."

"This is for caravans of people who have been publicly on this 2,000 [mile] journey," the lawmaker said.

"I'm still confused," Vittert interrupted. "What does shutting down the border mean? The law says now you can only come into the United States legally... I'm just confused at what shutting it down means if it's not already shut down to illegal immigration."

"If it was shut down now, you still wouldn't have the 500,000 coming across from illegal immigration," Norman answered.

"Exactly," Vittert agreed. "I'm just confused -- if we have 500,000 coming across now illegally, are you saying the border patrol and military aren't doing enough? Does shutting it down mean that it's going to be shoot on sight? What does shutting down the border mean?"

Norman insisted that there would continue to be a "legal process of people getting through."

"But isn't that what the border patrol and military is already supposed to be doing?" Vittert pressed. "How does the president saying 'shut it down' make them any more able to do it today than they were able to do it 10 days ago?"

"It's impossible without a wall to control it completely," Norman stated.

"The president is saying if Mexico won't allow the asylum-seekers to stay there, he's going to shut down the border," the Fox News host explained. "He's already said he's going to build a wall so conceivably shutting down the border means something different. But I'm not hearing from you an explanation of actually what it means."

"It means that the barbed-wire fences that's being put up now to stop the caravans," Norman remarked.

"I'm still confused," Vittert admitted. "What is the president going to do different tomorrow when he -- quote, unquote -- shuts down the border than is done now? Are the orders going to change to the military? Is there are going to be more barbed wire? Are you going to deploy extra Border Patrol agents and how do you shut something down that we've been unable to shut down by your own admission for decades?"

"So what does 'shut down the border' actually mean?" he demanded to know.

"It's a combination of all of the above," Norman said. "Barbed-wire fences, National Guard, more troops to stop what's going on. Is he going to shut it down 100 percent? Probably not."

Vittert concluded the interview by thanking Norman for answering the question.