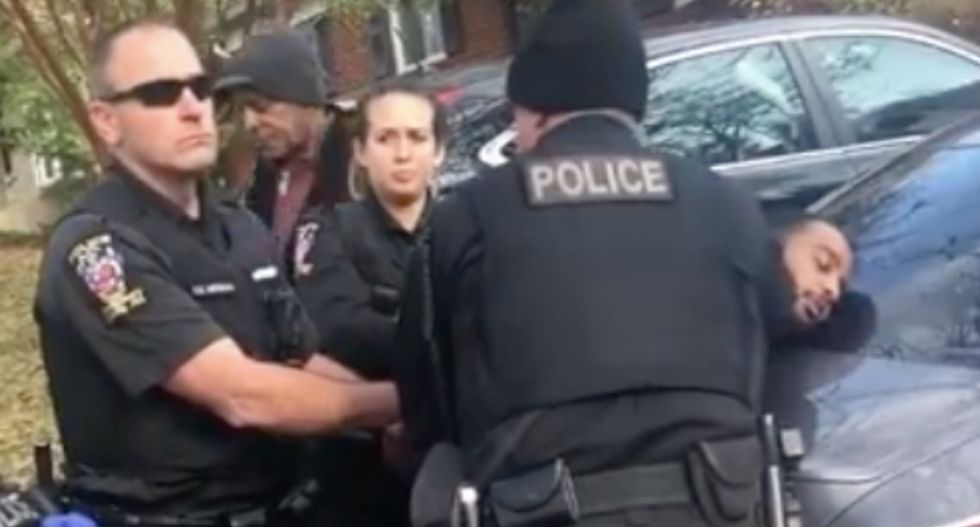 23-year-old Samir Ahmed (right, with head on a car) being arrested by Silver Spring, Maryland police officers. Image via screengrab.

A black Marylander was arrested after helping his drunk neighbor get inside his house -- and police told the good Samaritan that they thought he was the one who was inebriated.

WUSA9 reported that 23-year-old Samir Ahmed found his drunk neighbor passed out in his lawn on the morning of Sunday, November 17 and decided to walk him home.

When he came back, police -- who had been called by someone else who was concerned about the drunk neighbor -- had arrived.

Police claimed they smelled cannabis on Ahmed and that gave them probable cause to search him. Ahmed, those same officers claimed, resisted their attempts to search him.

In a video recorded by a bystander, neighbors can be heard insisting that the man lives in the neighborhood and had just helped a drunk person get home -- to which an officer replied, "I think you're the intoxicated one."

In the nearly 18-minute long video, officers are heard laughing at the situation and telling bystanders who challenged Ahmed's arrest that "we don't answer to you."

WUSA9 reported that following the arrest, Ahmed was charged with resisting arrest, disorderly conduct and other unspecified offenses. He also was given a citation for a small amount of cannabis he had on him.

You can watch the video of Ahmed's arrest below: