Blue Wave 2019: Dems landing top recruits in 3 of 3 races — while the GOP struggles to recruit 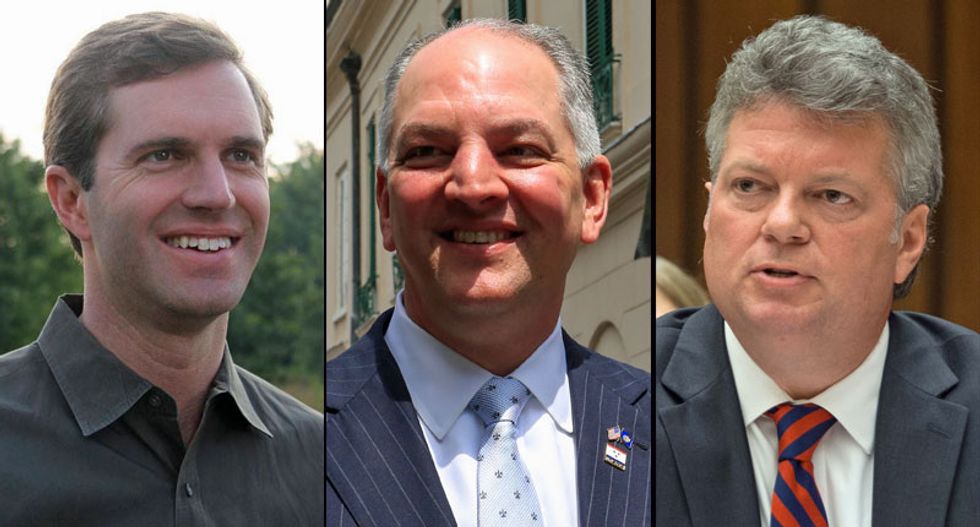 Election administrators in multiple states are still counting the ballots from the 2018 midterms, but that hasn't stopped candidates from emerging in the three states that will hold gubernatorial races in 2019.

Democrats, buoyed by big wins in November, are excited for the three 2019 contests in Kentucky, Mississippi and Louisiana.

Adkins was elected to the Kentucky legislature at age 26 after helping the Morehead State University basketball team to the Ohio Valley Conference Championship. He has served ever since, including as the Democratic Floor Leader since 2003.

In Mississippi, Attorney General Jim Hood -- the only Democrat elected statewide -- has announced his campaign, the Jackson Free Press reports.

In the Republican primary, the GOP establishment is expected to line up behind Lt. Gov. Tate Reeves. Insurgent far-right state Sen. Chris McDaniel, who finished third for U.S. Senate on Tuesday, is also considering a bid.

Louisiana is the one seat Democrats are defending, with incumbent Gov. John Bel Edwards standing for re-election.

U.S. Sen. John Kennedy (R-LA) is considering a bid, but is waiting at least a couple more weeks before making a decision, The Advocate reports.

"I'll make a decision here in the next couple of weeks," Kennedy said this week.

"I haven't even made a decision to run yet. I've tried not to be coy about this," he added.

Gov. Edwards expanded health care coverage to more than 481,000 Louisiana residents via executive order shortly after his upset victory in 2015.

"Gov. Edwards is in a strong position for re-election and is one of the most popular governors in America for a reason: He’s working across party lines to get things done for Louisianans,” argued Jared Leopold, spokesman for the Democratic Governors Association. “The DGA is fully committed to re-electing Gov. Edwards, and he’s proving that putting Louisiana first is a winning strategy for the people of the state."