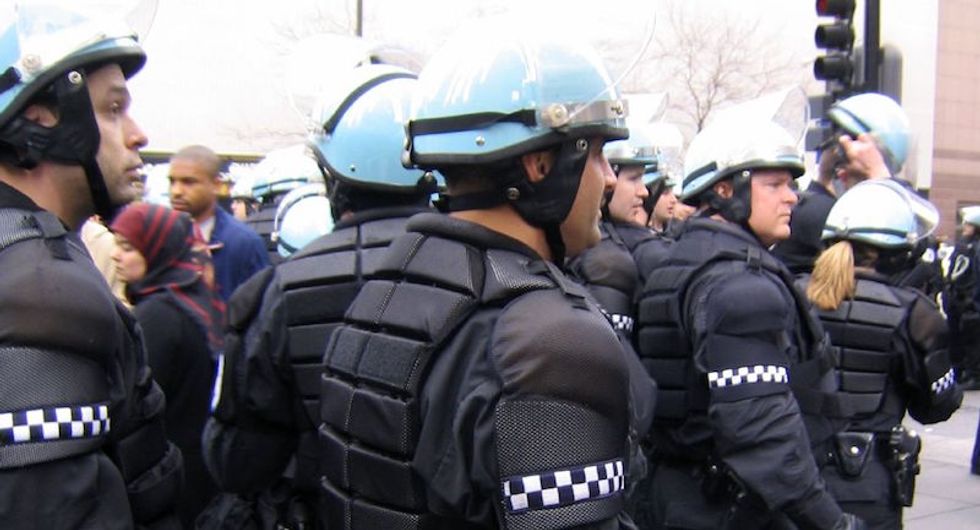 A BuzzFeed News investigation revealed not only that former and current Chicago cops were sharing racist memes in a private Facebook group — but that the group's founder was an unwitting target of Russian electoral interference.

In response to police officer Jason Van Dyke being convicted of murder last month for shooting black teen Laquan McDonald, one member of the Chicago Code Blue group said it was "very sad" that Chicago had "give[n] the keys to the city to the thugs."

The group boasts more than 53,000 members, the report noted — many of whom appear to be violating CPD's social media policy that bars them from sharing "content that is disparaging to a person or group based on race, religion, sexual orientation, or any other protected class."

One meme shared in the comments of a post shows the infamous boy peeing illustration with a stream of urine falling on the phrase "Black Lives Matter." Another shows a red bandana-clad skeleton pointing two pistols while flanked by the words "every thug deserves a slug."

Chicago Code Blue founder Gary Snow was, according to BuzzFeed, a seemingly-unwitting target of Russian trolls attempting to interfere in the American presidential election in 2016.

"In an indictment unsealed in February, Special Counsel Robert Mueller alleged that Russian trolls tried to use Snow, who was not mentioned by name, to get a flatbed truck that could carry a caged Hillary Clinton stand-in at a 2016 rally for then-Candidate Donald Trump," the report noted, adding that the group founded didn't provide the truck and was not charged or accused.

BuzzFeed noted that Russians do not appear to have infiltrated the Chicago Code Blue page itself — but the racist and conspiracy theorist posts made there are the bread and butter of the Kremlin-linked efforts to "sow discord" in the US.

The report also noted that "the most inflammatory comments do not generally come from current officers."

Read the entire report on Chicago Code Blue via BuzzFeed.