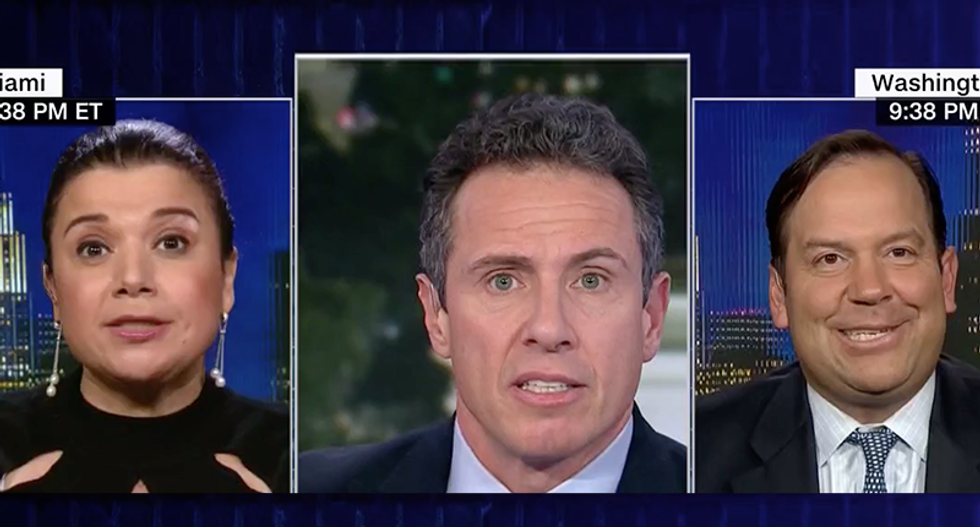 In a heated discussion between CNN's Chris Cuomo, Ana Navarro and Steve Cortes, two of the panelists schooled one of President Donald Trump's key apologist, who maintained he was far from racist.

Navarro began by mocking Trump for claiming "the alien invasion is coming" and demanding "build the wall" when her state of Florida is surrounded on three sides by water.

"The contrast is so great," she continued. "There's a campaign run on fear-mongering, division, hostility, gloom and doom, the end of the world is coming!"

She noted that candidates like Andrew Gillum and Beto O'Rourke are preaching positivity and unity amid the hostility on the right.

Cortes attempted to make the economic argument many Republicans say they wish the president was making instead of the campaign of fear.

Cuomo played clips of Trump and the conversation quickly devolved into an immigration shouting match. The host noted someone coming into the country illegally doesn't mean that they're a murderer, a gang banger or a drug dealer, but that's not the way the president talks about it. Cuomo explained that it's obvious he's "milking the hell out of the immigration issue."

"Funny all his ads are not about people that came through the Canadian border," Navarro quipped.

"We have a right to defend our borders!" Cortes said.

Cuomo wondered why Trump says he wants to "round up" all of these people but refuses to throw huge swaths of cash at ICE to actually do it.

"You call him a racist when you don't want to talk about policy," Cortes said.

Cuomo tried to throw it to a break but it devolved into a shouting match from there.