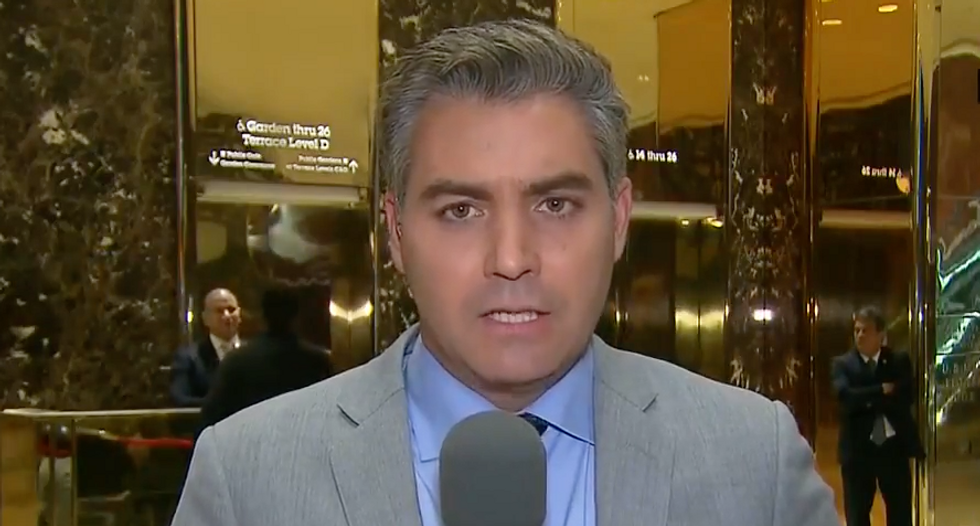 A conservative Washington Post columnist on Thursday encouraged CNN's Jim Acosta to sue Donald Trump for breaching the First Amendment of the Constitution after the correspondent was stripped of his press credentials following a tense exchange with the president.

Trump's conduct, as carried out by White House press secretary Sarah Huckabee Sanders, "violates every democratic norm one can think of — and what’s more, is illegal," the Post's Jennifer Rubin wrote.

"The government cannot punish or threaten the press or individuals based on the content of what is reported" under the First Amendment, the columnist noted, adding that "a federal court already ordered Trump to unblock Twitter users who were critical of him."

While there is already a case brought by PEN America against Trump for threatening journalists with government retaliation when they report on him in ways he finds unsatisfactory, Rubin noted that "Acosta has an even more obvious case because he is the one whose rights have been directly violated."

"The utility of filing a lawsuit (other than in annoying and embarrassing Trump and Sanders) would be a declaratory judgment ordering the White House to return Acosta’s credentials and barring the White House from taking such action in the future," she wrote.

Rubin went on to urge other members of the press to boycott Sanders' press briefings until her office returns the CNN reporter's press credentials.

"While I believe the press must continue to cover and attend news conferences when Trump is present, there is absolutely no reason to attend Sanders’s briefings," the conservative commentator wrote, "which do not impart information but instead use the press as a forum to abuse and threaten reporters and spread misinformation."