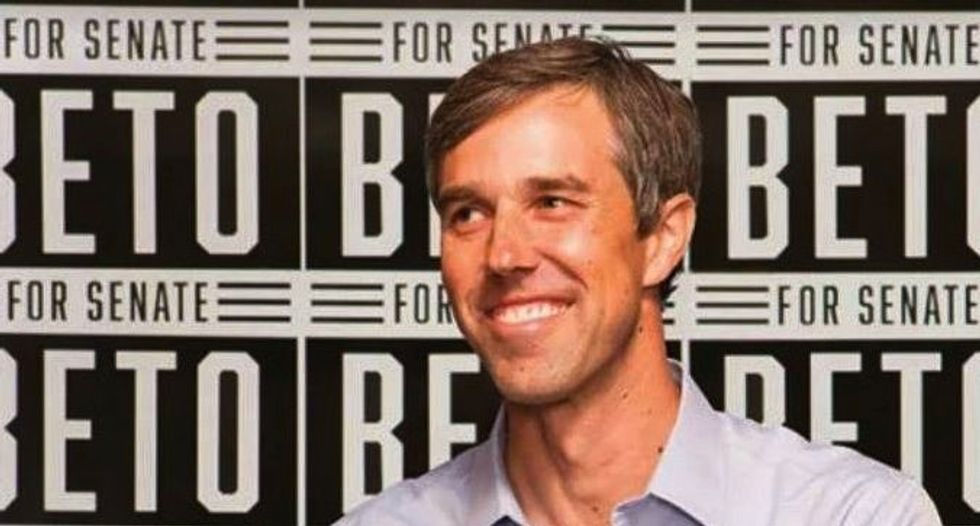 On Friday morning, Sen. Ted Cruz (R-TX) made a bizarre accusation against his opponent, El Paso Rep. Beto O'Rourke: that he might be illegally funneling money from his campaign to assist the Honduran migrant "caravan" that is currently traveling through southern Mexico:

It is a wild conspiracy theory. But Cruz did not pull it out of thin air: he was likely referring to a sting video released on Thursday night by Project Veritas, a far-right group that inserted spies into the O'Rourke campaign. The heavily edited and spliced footage purports to show staffers discussing how they used prepaid cards issued by the campaign to purchase supplies for members of the caravan.

Except that is not actually what they were saying. The video actually shows field organizers discussing a group of migrants who were dropped off at a bus station in El Paso by the federal government, and according to O'Rourke's campaign, a few of them donated $300 to a Catholic immigrant shelter that had taken them in, to buy blankets, water, and food for sick children in the group. These asylum seekers have no relation whatsoever to the caravan currently trekking toward the U.S. border — Project Veritas simply cut the footage to conflate the two.

The staffers do mention possible FEC fines in the video. But as the Texas Tribune notes, a small nonprofit donation of this kind is legal, as long as it is reported to the FEC and the campaign does not get paid by the organization before it has spent all of the donation.

Cruz does not have an excuse for promoting this hoax, as Project Veritas and its founder James O'Keefe have a long history of doctoring footage and planting actors to make it look as though various media groups and liberal politicians are engaged in wrongdoing — often with absurd results.

In one case, O'Keefe tried to seduce a CNN reporter on a boat filled with sex toys. In another, he tried to entrap a Hillary Clinton-aligned political group in campaign finance violations by routing them money through a shell corporation he set up in Belize, only to be thwarted because that wasn't actually illegal. In yet another, he hired a woman to make a false rape allegation against former Alabama Senate candidate Roy Moore to the Washington Post, which their journalists saw right though. He even once tricked his way into the office of former Louisiana Sen. Mary Landrieu, a stunt that led to him being arrested and pleading guilty to illegally entering government property on false pretenses.

During this campaign season, O'Keefe has been frantically trying to catch Democratic candidates on something, planting people in the offices of Missouri Sen. Claire McCaskill, Arizona Senate candidate Kyrsten Sinema, Florida gubernatorial candidate Andrew Gillum, and Virginia congressional candidate Abigail Spanberger. For the most part, these operations either revealed nothing or ended when the campaign caught them and threw them out.

Despite their track record of deception and failure, President Donald Trump appears to be very fond of Project Veritas, having cut them a $10,000 check from his charitable foundation in 2015. Other donors to O'Keefe, however, have recently bailed on him as his group has faced investigations and lost nonprofit status in some states.

The Texas Senate race is one of the most closely watched in the country, highly publicized both because of Cruz's general unpopularity and because of O'Rourke's grassroots charisma. Polls have generally found Cruz ahead, but the polling has tightened in recent days.