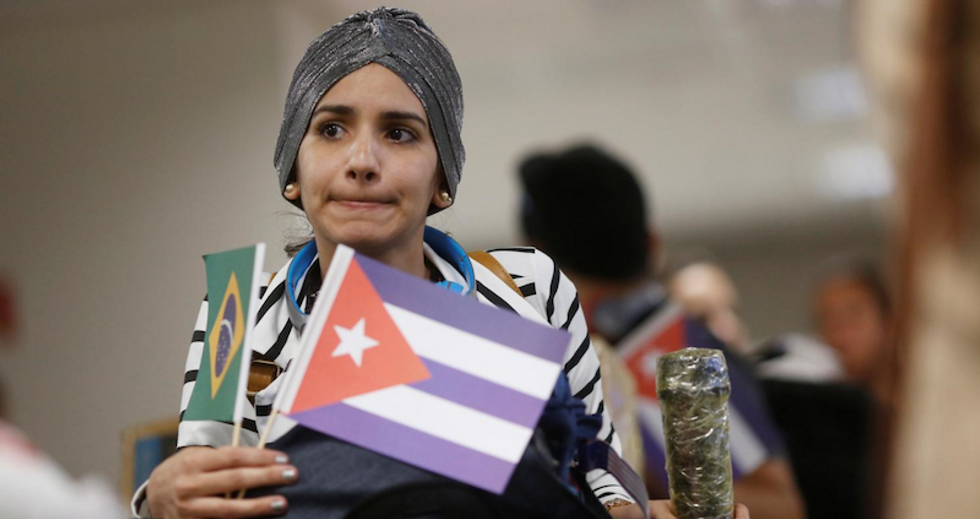 A Cuban doctor carries Brazilian and Cuban flags as she returns to her home, after criticism by Brazil's President-elect Jair Bolsonaro towards Cuban doctors prompted Cuba's government to sever a cooperation agreement, in Brasilia, Brazil November 22, 2018. REUTERS/Adriano Machado

Bolsonaro said the Cuban doctors were being used as “slave labor” because the Cuban government took 75 percent of their salaries. He said the program that began in 2013 could only continue if they got full pay and were allowed to bring their families from Cuba.

Bolsonaro, an admirer of U.S. President Donald Trump, was elected last month by Brazilians fed up with rising crime and rampant corruption that reached new highs during almost a decade and a half of leftist governments with close ties to Cuba.

The Cubans practiced mostly in poor and remote areas of Brazil where Brazilian doctors do not want to work. The government is now scrambling to replace them in 8,332 positions left vacant by the sudden departures of the Cubans.

Cuba has a respected health service and generates major export earnings by sending more than 50,000 health workers to more than 60 countries. Even receiving a fraction of their salaries, the money was good for the doctors by Cuban standards.

As they lined up to check in at the Brasilia airport, many had large mainly 49-inch smart TVs packaged to take home to communist-run Cuba, where such imported sets are very expensive.

“I will be happy to see my children but sad to leave people without medical care,” said Lume Rodriguez, a general practitioner who spent two years in the interior of Bahia state.

“Our patients came to hug us goodbye,” said Rafael Sosa, 32, from Granma province in eastern Cuba. “I visited many patients here who had never had a doctor in their home.”

In many Brazilian towns and the outskirts of cities that relied on the Cuban doctors, usually crowded waiting rooms at public health posts were empty this week and notices said appointments had been canceled until further notice.

Adrielly Rodrigues, a pregnant 22-year-old, was turned away on Wednesday when she went for a pre-natal scan in Santa Maria, a town near the capital Brasilia.

“We are so worried because we don’t have the money to pay for a private doctor and she is five months pregnant and still needs to be monitored and have tests,” said her mother, Adriana Rodrigues.

A national lobby of mayors, the FNP, and the municipal health authorities council Conasems said in a statement that 29 million Brazilians could be left without basic healthcare. They urged the government to make it possible for the Cubans to stay.

Bolsonaro, who takes office on Jan. 1, said last week he would grant asylum to any Cuban who asks for it, escalating tensions with Havana. He said Cuban doctors were not qualified and would have to take exams to practice in Brazil.

The Health Ministry plans next week to waive a requirement that Cubans validate their medical diploma in Brazil so that they can continue working directly contracted by the Brazilian government and not through the Pan-American Health Organization.

It is not clear how many Cubans will want to break with their communist-run government’s doctors-for-export program, which is present in about 60 countries, especially if they have children in Cuba since it would be tantamount to defecting.

Brazil plans to fill the medical vacuum with local hires. In just two days since registration opened, 3.648 Brazilians have been selected to fill the empty posts, a ministry spokesman said, but those replacements are mainly in large urban areas.

One Cuban who will be staying in Brazil is Richel Collazo, who was so liked in the small town of Chapada in southern Brazil that the mayor asked him to become municipal health secretary.

“My town needs doctors and he has been key to our medical care,” Mayor Carlos Catto said by telephone.