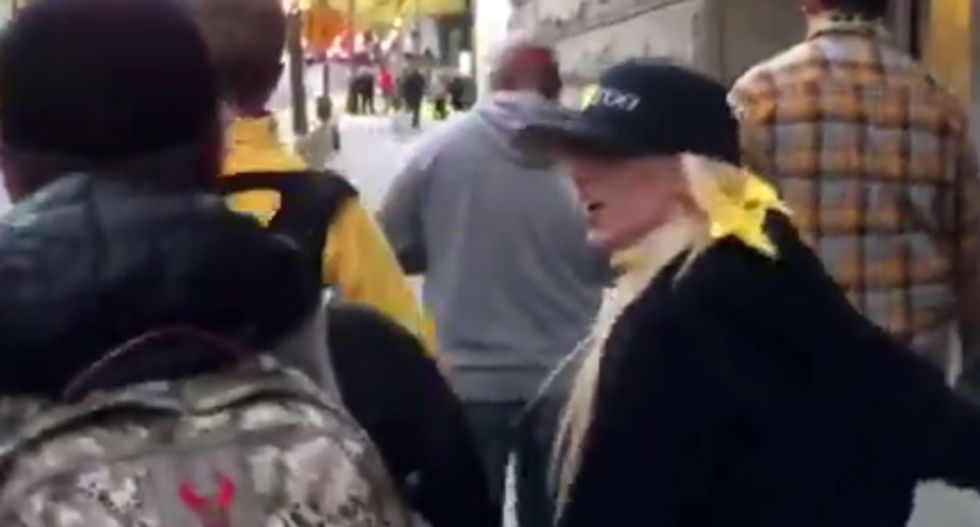 During the latest gathering of far-right extremists in Portland, Oregon, Haley Adams, a member of the violence-prone Patriot Prayer, revealed her white-nationalist leanings in an interview.

Adams organized the “#HimToo” rally on November 17 in downtown Portland that drew a few dozen supporters and more than 300 anti-fascist counter-protesters.  She announced the event in the wake of nomination hearings for Supreme Court Associate Justice Brett Kavanaugh, who was accused by multiple women of sexual assault. Adams says the Him Too movement started because “There’s a war on men” who are being “falsely accused, slandered, attacked and harassed at their homes.”

Adams says she is a “civil rights activist.” At the rally, she rejected gender equality. She told the gathering, “Men and women are different. We have different roles.”

After the rally, Adams was asked about comments she’s made on social media in support of “white pride.” She embraced it, saying, “Damn straight I support white pride. I support my race.” When she was described as a supporter of white nationalism, Adams didn’t dispute it, saying, “Everyone should be supportive of their own race.”

Haley Adams the organizer of the #HimToo event in Portland had this to say about white pride. https://t.co/YByFXhpWiF
— Storm (@Storm) 1542510530.0

Adams was interviewed while walking through Portland with a small contingent of Patriot Prayer and the Proud Boys. The FBI considers the Proud Boys to be “an extremist group with ties to white nationalism,” according to newly revealed documents.

The far-right groups are intertwined in the Pacific Northwest. They overlap with and attract neo-Nazi, white supremacist and neo-Confederate groups — some responsible for deadly political violence. Patriot Prayer and the Proud Boys use violence to recruit members. They’ve staged more than a dozen rallies in Portland since 2017, many ending in massive brawls with anti-fascists.

Violence was minimal this time, beyond a few bottles and smoke bombs hurled from the anti-fascist side. Portland police and Mayor Ted Wheeler have been slammed for failing to arrest far-right brawlers despite them openly vowing, committing, and bragging of violence. The protest came days after Wheeler and the police brass backed a city ordinance to limit protests that was rejected by the City Council. A heavy police deployment separated the competing rallies, but fragmented once they began a cat-and-mouse game in the streets. Anti-fascists came face-to-face with the far-right groups repeatedly, mostly limiting themselves to chants such as “Nazis go home.” Six people were arrested.

Adams’s method of claiming universal values while spouting bigotry is lifted from Patriot Prayer leader Joey Gibson. He says the group can’t be racist because he is half-Japanese. Gibson frequently references Martin Luther King, Jr., to mainstream the group’s extremism.

Participants, when asked why they were there, said they were supporting “free speech.” The rally was not billed as a free-speech event, however. It’s aim was to highlight how men are supposedly victimized. More than 80 percent of attendees were men.

One older army veteran with a cane stood on the fringes. He said the #MeToo movement was “really touchy” for him because “There’s a lot of things that happen to men that shouldn’t happen. And there’s a lot of things that men do that shouldn’t happen.” He said, “I have complex PTSD. I had it in the army. I had it when I was growing up. People in my family were very abusive, mentally, physically.” Unable to continue talking, he apologized and walked away.

#MeToo is premised on men understanding the nature of sexual assault and harassment and taking responsibility for ending it. It includes prominent male celebrities such as Terry Crews who speak out against toxic masculinity and have told of being sexually abused themselves, and the ensuing humiliation and lack of accountability by perpetrators.

However, #HimToo was mostly about belittling #MeToo, women and sexual minorities. One speaker said, “The Me Too movement doesn’t represent us men. They force victimhood on women and castrate men who speak out against them.”

Participants decried, “The culture that’s being taught in universities about the toxic masculinity and trying to take the patriarchy down.” They favored “men as the head of the household, the way it’s been traditionally” and government regulating women’s bodies “if it would prevent abortion.”

Billy Sessions, who attended the deadly Unite the Right rally last year in Charlottesville along with his neo-Confederate group, the Hiwaymen, was invited from Arkansas to speak at #HimToo. He opposes same-sex couples because of his “Christian values. I believe in the Bible.” When asked what his opinion would be if a majority of voters in Oklahoma approved the killing of homosexuals according to biblical values, Sessions said, “Well, state’s rights, tenth amendment, if the people of the state of Oklahoma vote for it, it’s theirs.”

Gibson’s right-hand man, Tusitala “Tiny” Toese, a street fighter who has been filmed repeatedly assaulting counter-protesters in Portland but walks the streets there untouched, sneered at the LGBTQ community. He said, “You do whatever the hell you want to do, just don’t try to force me to respect that B.S., okay?”

The bigotry flowed in the park behind metal barriers guarded by scores of DHS and local police in riot gear and equipped with less-lethal weapons. Out in the streets, the far-right extremists were unnerved. They marched around confused whether to choose fight or flight as anti-fascists taunted them. Pointing at counter-protesters, Gibson screamed at them eight times, “You raped me.”

After a glass bottle smashed near the far-right group, Tiny yelled at police, “What do you want us to do?”